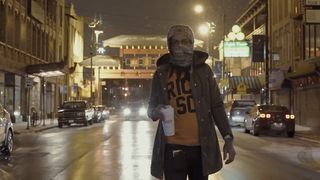 After releasing his “Juice & Gin” video in July, Valee follows it up with the premiere of “Vlone.”

Just dropped with my brother @valee via @worldstar go check it out ?. Prod @taycreations

Directed by Toinne Tarantino, the track is taken from the Chicago rapper’s debut EP, GOOD Job, You Found Me from earlier this year. In the visual, the G.O.O.D. Music signee is seen roaming the streets of Chicago’s Chinatown during winter in a slow pace, while highlighted by donning a printed thermal face mask and essentially striding around looking cool.

In addition, the intro of the visual claims that the video is “based on a novel by Valee,” however, there is no evidence that Valee has actually written a novel. Enjoy the clip above and have a listen to GOOD Job, You Found Me below.

For more on Valee, read what the artist had to say about his hometown, Chicago, working with Kanye West and Pusha-T, his personal style and more.

In other new music videos, Quavo flaunts his exotic whips in “L A M B T A L K.”