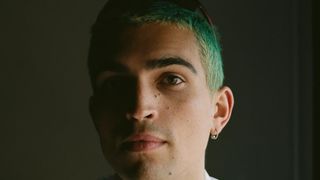 After releasing a 71-track compilation of sketches, samples, and loops earlier this year, South London-based producer Vegyn is back to share a new collaboration with JPEGMAFIA, while simultaneously announcing his debut album, Only Diamonds Cut Diamonds. Vegyn is known for collaborating with Frank Ocean on Endless and Blonde, in addition to co-hosting Ocean’s Blonded show on Apple’s Beats 1 radio station.

“Nauseous / Devilish” follows Vegyn and JPEGMAFIA’s creative partnership on “Rap Grow Old & Die x No Child Left Behind” from JPEGMAFIA’s recently released album, All My Heroes Are Cornballs. The collaborative track is introduced to the world via an official video which follows the narrative of Vegyn’s two previous visuals for “Blue Verb” and “Cowboy ALLSTAR.” According to the press release, the “Nauseous / Devilish” clip showcases a “volatile dancer jerking his way through the track.”

Welcome to the Weird Wide World of Vegyn
MusicsponsoredNovember 8, 2019

Frank Ocean Is Dropping a New Track Soon (But Only on Vinyl)
MusicsponsoredFebruary 25, 2020