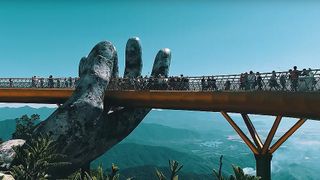 An amazing new bridge that appears to be held up by giant stone hands has been erected in Vietnam. The structure, which opened in early June, sits among the Ba Na Hills 1,400 meters above sea level behind the city of Da Nang on the country’s east coast.

The 150-meter walkway was designed by TA Landscape Architecture, which crafted the weathered-looking stone hands to seem like they’re lifting the bridge, giving visitors the impression they’re being guided along by some giant stone-god. Take a look in the video above.

According to United News International, the bridge is said to be part of a $2 billion development project to bring tourists to Vietnam. The structure emerges from the Thien Thai Garden and is lined with purple Lobelia Chrysanthemums along its golden perimeter.

The Cầu Vàng, as it’s called in Vietnamese, isn’t the only tourist attraction in the Ba Na Hills, as architecture magazine The Spaces points out. The area is also home to amusement complex Fantasy Park and a French-style village with cobbled streets.

Do you love the design of the Golden Bridge? Let us know your thoughts in the comments.

Next, PlantShed has opened its first downtown New York location.

Hollywood Is Reeling After Ricky Gervais’ Most Offensive Golden Globes Monologue Yet
MoviessponsoredJanuary 6, 2020

Here Are All the Winners From Last Night’s Historic 2020 Golden Globes
MoviessponsoredJanuary 6, 2020

Solange Shows How She’s the Director of Her Own Universe With Bridge-s
DesignsponsoredNovember 15, 2019
Follow
Highsnobiety Design
What To Read Next
Load More
Search Results
Load More