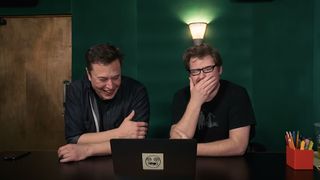 If you’re unfamiliar with Meme Review, the premise is basically to rate memes out of 10. Musk and Roiland were shown a mix of random memes, as well as memes featuring Musk himself. Perhaps somewhat surprisingly, Musk was much quicker on the uptake than comedy writer Roiland. He even discusses the origin of the word “meme”, explaining that it was coined in Richard Dawkins’ 1976 book The Selfish Gene, and is based on the premise that “ideas propagate like genes, based on a survival of the fittest paradigm. Only the strongest memes survive.”

At time of writing the video is #6 trending on YouTube, with over 7.5 million views. Watch the video above (Musk and Roiland’s segment starts at 13.35).

PewDiePie fans have been asking for Musk to appear on Meme Review for a while now. Musk even asked his Twitter followers in January if he should host it.

In amongst Tesla and SpaceX tweets, Musk occasionally posts memes and jokes in general. Check out a selection below.

There are no coincidences pic.twitter.com/9AEbbuXZGn

Watch What Happened When Tesla’s Cybertruck Challenged Ford’s F-150 to a Tug-Of-War
DesignsponsoredNovember 26, 2019