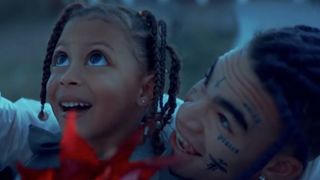 404 is the poignant story of the complex relationship between father and daughter, told through a dystopian lens with a literal Snapchat filter. Dazed locates the work as somewhere between The Florida Project and Black Mirror. Watch the film above.

Director Antoine Besse describes Boo’s eyes as a “vision of a futuristic handicap and of the problem we have with the image we see and the one we want to reflect for others to see.” Her aberrantly large eyes lose their playful valence outside of the confines of social media. In 404, they become the locus of the two character’s anxieties about their lives in this near-future French social housing environment.

GR404 – played by Théo Christine – wakes up from a night of partying to the arrival of his young daughter. The first thing we notice about Boo – played by Ella Ayeni – is her Snapchat filter-esque eyes, which become a point of tension and shame at various points throughout the short film, before ultimately presenting a moment for reconciliation and celebration.

Brought together in collaboration with Bordeaux-based RAVE Skateboards’ new creative arm, 404 is a hybrid project, at once a music video and EP by roseboy666, as well as a story about the complex relationship between father and daughter.