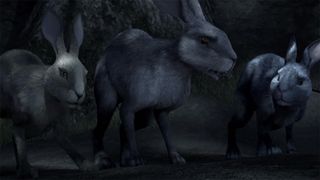 Ahead of tomorrow’s premiere, Netflix and BCC share a new clip from their anticipated adaptation of Richard Adams’ bestselling 1972 novel, Watership Down. The footage is pulled from the initial episode of the four-part miniseries, as we see a group of brave rabbits, led by James McAvoy’s Hazel, Nicholas Hoult’s Fiver and John Boyega’s Bigwig, making a daring escape from Sandleford Warren, with hopes of finding a better life.

Set in southern England, Watership Down tells the story of a gang of rabbits who are forced to occupy a new home after humans encroach on their territory. While searching for a safer environment, these animals must combat vicious predators and cunning adversaries.

In addition to McAvoy, Hoult and Boyega, Olivia Colman, Ben Kingsley, Gemma Arterton and Daniel Kaluuya also feature in the series, written by Tom Bidwell and directed by Noam Murro. The four-part program premieres on BBC One tomorrow, December 22. You can look for the entire series to land on Netflix the following day.

For more surrounding ‘Watership Down,’ listen to Sam Smith’s new track, “Fire on Fire,” which was recorded for the series.