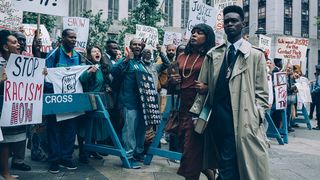 Today Netflix gives us a first look at Ava DuVernay‘s new limited series, When They See Us, detailing the true story of five teenagers of color — referred to as the Central Park Five — who were wrongfully convicted of raping a woman.

Told in four parts, the program centers around the five kids from Harlem — Antron McCray, Kevin Richardson, Yusef Salaam, Raymond Santana and Korey Wise — dating back to the spring of 1989 when they were initially questioned about the incident. From there, When They See Us spans 25 years to their exoneration in 2002 and on to 2014 when they reached a settlement with the city of New York.

When They See Us comes to Netflix May 31.

Not thugs. Not wilding. Not criminals. Not even the Central Park Five. They are Korey, Antron, Raymond, Yusef, Kevin. They are millions of young people of color who are blamed, judged and accused on sight. May 31. A film in four parts about who they really are. WHEN THEY SEE US. pic.twitter.com/QQBVqo4TYM