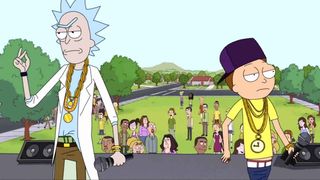 Popular Adult Swim series Rick And Morty is officially coming back with at least 70 more episodes, and while Kanye West has admitted to being a big fan already, Genius also points out that the hip-hop community actually loves the animated sci-fi comedy show overall.

In the three-minute clip above, the crew at Genius dissect the hip-hop references paying homage to the cartoon, ranging from their collab with Logic announcing his recent mixtape, Bobby Tarantino 2, to lyrical references on songs like YBN Nahmir’s “Rubbin Off The Paint” and Big Sean and Metro Boomin’s “Go Legend.” Additionally, co-creator Dan Harmon and Justin Roiland share their love for the genre.

Also, here are five schwifty storylines we need to see resolved in season four of ‘Rick And Morty’