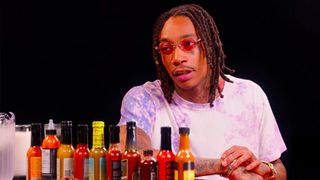 Following last week’s special two-guest episode with Joji and Rich Brian, Wiz Khalifa is the next celebrity to appear on Hot Ones. While taking on the spicy wings challenge, Wiz dishes on everything from his new workout regimen, to places to visit in Pittsburgh, being a rap dad, and much more.

Now engulfed in working out and MMA, the Taylor Gang emcee details sparring with UFC greats and what his go-to move would be if he ever got into a serious altercation. Khalifa also remembers the time he ate at Salt Bae’s restaurant, as well as partying with JAY-Z and Kevin Hart, and specifically trying to get JAY to smoke weed.

Speaking of cannabis, and Wiz being the expert that he is, the 30-year-old musician breaks down the composition of marijuana for the less-informed.

To hear Wiz discuss all these topics and more, press play above.

After watching the entertaining episode, be sure to revisit Wiz’s recently released ‘Rolling Papers 2’ below.