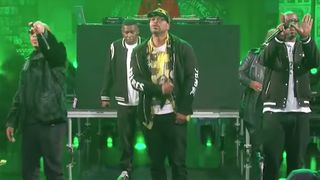 For the closing night of Jimmy Kimmel Live!‘s Brooklyn residency, hip-hop collective Wu-Tang Clan hit the stage to perform a couple of hits from their iconic 1993 debut album, Enter the Wu-Tang (36 Chambers).

Watch the performance of “C.R.E.A.M” in the video above, and “Protect Ya Neck” below.

The performance was somewhat of a celebration, marking the album’s 25th anniversary and a near-complete reunion of the Clan’s members: The RZA, Method Man, Ghostface Killah, Raekwon, GZA, Inspectah Deck, U-God, Cappadonna, and Masta Killa were all in attendance. The late Ol’ Dirty Bastard was replaced by his son, Young Dirty Bastard.

Earlier in the episode, RZA and Method Man played “3 Ridiculous Questions” with Kimmel, answering queries like “Where do goose bumps go?” to which RZA had quite the amusing theory. Watch below.

Where do you think goosebumps go? Share your theories in the comments.

In other news, Kanye West surprised Kim Kardashian with romantic gifts for her 38th birthday.

A Wu-Tang Clan Lullaby Album Is On the Way
MusicsponsoredMarch 6, 2020