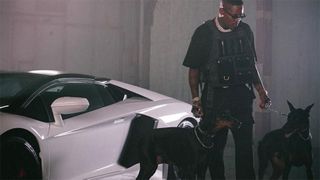 YG is back this week in support of his August 2018 release, Stay Dangerous, delivering the official music video for album cut, “Bulletproof.”

Starring YG and collaborator Jay 305, the clip finds the Compton rapper firing shots at 6ix9ine, as the two previously engaged in a social media beef earlier this year. At the beginning of the “Bulletproof” visual, we see an actor portraying 6ix9ine being escorted into prison, amidst chants of “pedophile.”

Back in 2015, 6ix9ine pled guilty to a charge stemming from the use of a child in a sexual performance. Then in July of this year, the young rapper was arrested for choking a 16-year-old fan in J.F.K. Airport.

Press play above to watch YG’s “Bulletproof” video, then see below to revisit Stay Dangerous.

In other music news, Kanye West has teased a potential new song on his Instagram.