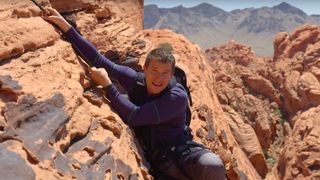 Netflix presents the trailer for You vs. Wild, a new live-action interactive series from the streaming service which will premiere on April 10. The eight-episode series will put viewers on various adventures around the world alongside survival expert Bear Grylls, who is most known for his work on the reality adventure series Man vs. Wild and Running Wild.

On April 10, you will have the power to control which decision @BearGrylls makes as he climbs towering mountains, enters dense jungles, and dives headfirst into #YouVsWild — a groundbreaking interactive adventure series! https://t.co/SplpOBFrjb

Each episode of You vs. Wild will feature interactive experiences with multiple choices, as Netflix will continue its experimentation with interactive entertainment, such as the highly-successful Black Mirror: Bandersnatch and several children’s programs.

This is going to be a journey unlike any I've EVER embarked on before. I need YOU to think ahead, choose wisely, and most importantly, never give up. ? Check out my instagram story now to see where YOUR adventure begins #YOUvsWILD @netflix #interactive https://t.co/P7xQeRJoI0 pic.twitter.com/qbSFFVVdHm

As shown in the preview of You vs. Wild, Bear Grylls’ adventure is up to you. Enjoy the sneak peek and watch it on Netflix beginning April 10.

For a deeper dive into the topic of wellness, check out our most recent episode of The Dropcast.