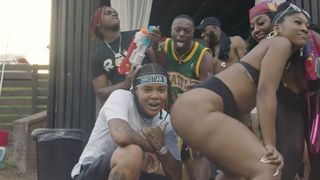 It’s been three years since Young M.A dropped her breakout single, “OOOUUU.” Fans of the Brooklyn rapper can finally look forward to her much-anticipated debut album coming sooner rather than later, as she has just announced next month’s release of Herstory in the Making.

Along with the news of the debut album, Young M.A also shares a new single and video, “PettyWap 2,” which will serve as the bonus track on Herstory in the Making. The video for the single shows the rapper enjoying herself at a pool party.

Herstory in the Making boasts production by Zaytoven, Mike Zombie, Antwan “Amadeus” Thompson, and NY Bangers, among others. According to the tracklist, there will be very few features.

You can look forward to Young M.A’s long-awaited debut album releasing September 27. Until then, pre-order a copy here.