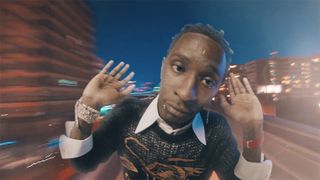 Hours after releasing his new Slime Language project, Young Thug is already back sharing the first visual in support of the work.

The “Gain Clout” aesthetic sees Thugger performing the song in front of a yellow coupe, as he is joined by two ladies on sport bikes. From there, the Atlanta rapper whips around in the ride amidst a flash of neon lights.

Press play above to check it out, then stream Slime Language underneath.

Young Thug was reportedly arrested on a felony gun charge at his Slime Language party in Los Angeles, but has since been released.

Faster then the officers got off… #SlimeLanguage lil bitch

Young Thug Drops Super Trippy, Surgery-Inspired Visuals for “Just How It Is”
MusicsponsoredSeptember 17, 2019

Young Thug & Diplo Are Teaming Up for the Next ‘Fortnite’ Concert
MusicsponsoredJune 23, 2020
Follow
Highsnobiety Music
What To Read Next
Load More
Search Results
Load More