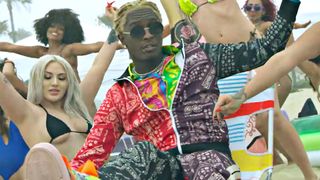 Young Thug has just released a new video for Gunna-featuring track “Surf” from new album So Much Fun. In the Be El Be-directed clip, Thugger and Gunna hit the beach, starting out by racing around in the sand on four-wheelers before getting into an all-out water gunfight with a group of ladies. Watch above.

Young Thug released his first non-mixtape full-length last week. Boasting 19 tracks, the album features guest appearances by the likes of Travis Scott, Future, 21 Savage, Lil Uzi Vert, and J. Cole. Listen to the album at the bottom of this story.

Young Thug will also soon be embarking on a North American tour with Machine Gun Kelly, starting September 30 in Toronto. See the dates below.