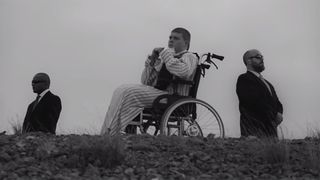 Yung Lean returns in support of his recently-released Poison Ivy mixtape, this week sharing the official music video for “Friday the 13th.” The black and white aesthetic was directed by Suzie and Leo, who are also responsible for Lean’s “Stranger,” “Metallic Intuition,” and “Hennessey & Sailor Moon” visuals.

Leo Siboni describes the “Friday the 13th” video as centering around “the life of a rockstar, who lost his appetite for life and being closer to a zombie than a human being. Now trying to rest in the countryside to find a way back to a life, accompanied by his bodyguards alone.”

Press play above to watch the Poison Ivy aesthetic, then revisit the project below. Also, Yung Lean is gearing up for his Wings of Desire event of live music and art, taking place at London’s Brixton Academy on November 21.

For more music, listen to Kendrick Lamar and Pharrell’s “The Mantra” from the ‘Creed II’ soundtrack.