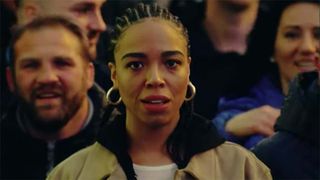 Zsela has one of those arresting voices that stops you dead in your tracks and leaves you choking on air that you inhaled too quickly. The New York native has been getting buzz in the nightlife scene for years as a party host, but properly introduced herself as a musician with her debut single “Noise” this past February. Today, she unveils the official music video for the soulful tune directed by Daniel Arnold.

“Here’s New York that drags you through the day when you’re busted, the teenage breeze tossing your ripped trash plastic body up 65 feet at stupid blue condos and drifting you down to spin in bodega doorways til you feel pretty again,” he said in a statement. “The one who laughs in your flat broke sad sack heartbreak face til you’re laughing back. It’s 5am somewhere, but the sidewalk here at sunset is a slow motion ocean anyway, and the traces of the way you used to cry only make your laugh all the harder to forget. That’s an interpolation of Zsela lyrics. Lily pads to float on through a song that twists you how the water goes even if you only listen to the music. Times Square at 7. Times square at 115. And little you, nudged forever onward by the noise.”

A release date for Zsela’s forthcoming EP has not been revealed at this time. This summer, she’ll be performing at Basilica Soundscape in Hudson, New York. After that, she’ll be on the road opening for Cat Power. Stay tuned here for more updates on the blossoming artist and watch the fill video above.

10 Looks That Prove Michael Jordan is the GOAT of IDGAF Style
SneakerssponsoredFebruary 15, 2020
We Recommend

Kanye West’s YEEZY Homes Get Torn Down as Neighbors Call 911 About the Noise
MusicsponsoredAugust 21, 2019