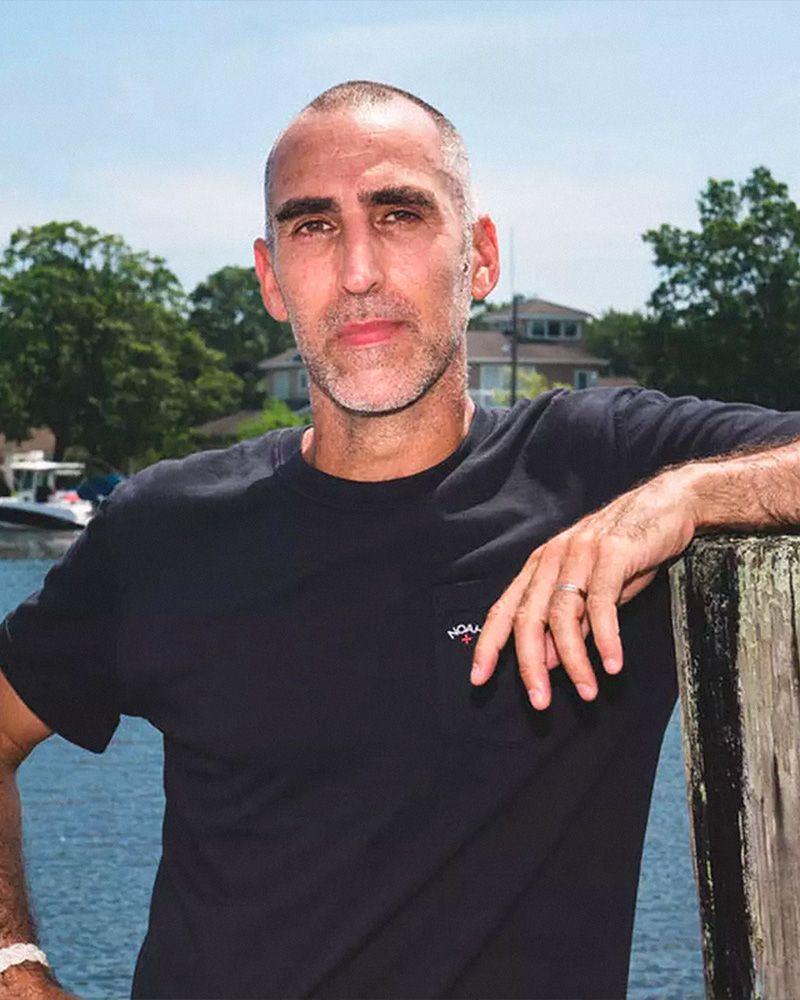 Brendon Babenzien is the founder of the environmentally-conscious American-based menswear brand Noah clothing. He is also the former creative director of Supreme – James Jebbia’s streetwear and skate culture behemoth, arguably the most influential streetwear brand of all time. As of 2022, Brendon Babenzien is the new creative director of the clothing brand J.Crew’s menswear line in an attempt to transform J.Crew and bring it back to its glory days.

Babenzien’s streetwear trajectory is long and notable, starting out working at his local surf-skate shop as a teenager. Babenzien moved to Miami from New York in the early 90s to help his friend Don Busweiler with his clothing brand. After that, he joined Supreme as a product developer/designer in 1996.

When was Brendon Babenzien born?

Brendon Babenzien was born in 1972.

Where is Brendon Babenzien from?

Where does Brendon Babenzien live?

Brendon Babenzien lives in New York, US, with his wife Estelle Bailey-Babenzien and their daughter Sailor.

Who is the owner of Noah clothing?

When did Brendon Babenzien join Supreme?

Brendon Babenzien’s Supreme journey started in 1996, two years after Supreme was founded by James Jebbia. Together they shaped and transformed the Supreme brand into a cult streetwear brand now recognized worldwide. After landing at Supreme in the mid-’90s, Babenzien was responsible for about 15 years of designs and their subsequent hype.

What is Brendon Babenzien's Noah clothing?

Noah clothing is an environmentally conscious clothing brand that Brendon Babenzien founded in 2002 after he departed Supreme. However, he shut it down and returned to Supreme as design director a few years later. In 2015, he left the Supreme again to relaunch Noah.

Born in Long Island, New York, Babenzien was exposed to coastal lifestyles and brands, including Nautica, Sperry, Ralph Lauren, and Tommy Hilfiger. It ultimately had an effect on the Noah clothing brand’s creative direction.

Noah clothing fuses the rebellious nature of skate, surf, and music subcultures with an appreciation of classic menswear and the weatherbeaten, nautical aesthetic of sailors and fishermen. It is clothes that have a function. Some notable collaborations include Mr. Porter, SSENSE, Golden Bear, and GREATS, and teamed up with photographer Michael Muller.

How is brendon babenzien sustainable?

Highlighting exploitative labor practices and mindless consumption, Brendon Babenzien, with his sustainable clothing brand Noah has set out to help shift the cultural understanding of ‘cool’ and promote more ‘intelligent consumption. As a customer, you are encouraged to bring your Noah pieces back once you are done wearing them and tell what you did with them (and you’ll get a discount on your next piece).

In the early 90s, Babenzien moved to Miami from New York to help his friend Don Busweiler with his clothing brand.

Babenzien moved back to New York from Miami and joined Supreme next to its founder, James Jebbia, who founded the brand in 1994, to work on its product development and creative direction.

Brendon Babenzien left Supreme to launch his own brand, NOAH clothing, taking inspiration from skate, surf, coastal lifestyles, and music subcultures with a twist on classic menswear and nautical aesthetic.

Brendon Babenzien and his wife Estelle Bailey-Babenzien relaunched the NOAH clothing brand, combining two talents of clothing and interior design. The designer couple restarted the brand with a store in New York focusing more on sustainability.

Teamed up with photographer Michael Muller in 2018 to create a line of T-shirts highlighting the number of sharks killed annually.

In April, Noah featured a two-week installation at the Galeries Lafayette Champs Elysées in Paris in honor of Earth Day.

Brendon Babenzien was named the new creative director of the J.Crew menswear line.

Babenzien’s J.Crew collaborated with BEAMS bringing together utilitarian staples of both brands.

“Streetwear” Redeemed Luxury, the Mass Market is Up Next
StylesponsoredMay 17, 2021

Work From Home
Noah’s Cofounders On Why Now is the Most Important Time to Support Small Brands
LifestylesponsoredMarch 31, 2020

Everything You Need to Know About Noah
StylesponsoredMarch 12, 2020
Load More
Highlights

Everything You Need to Know About Noah
StylesponsoredMarch 12, 2020