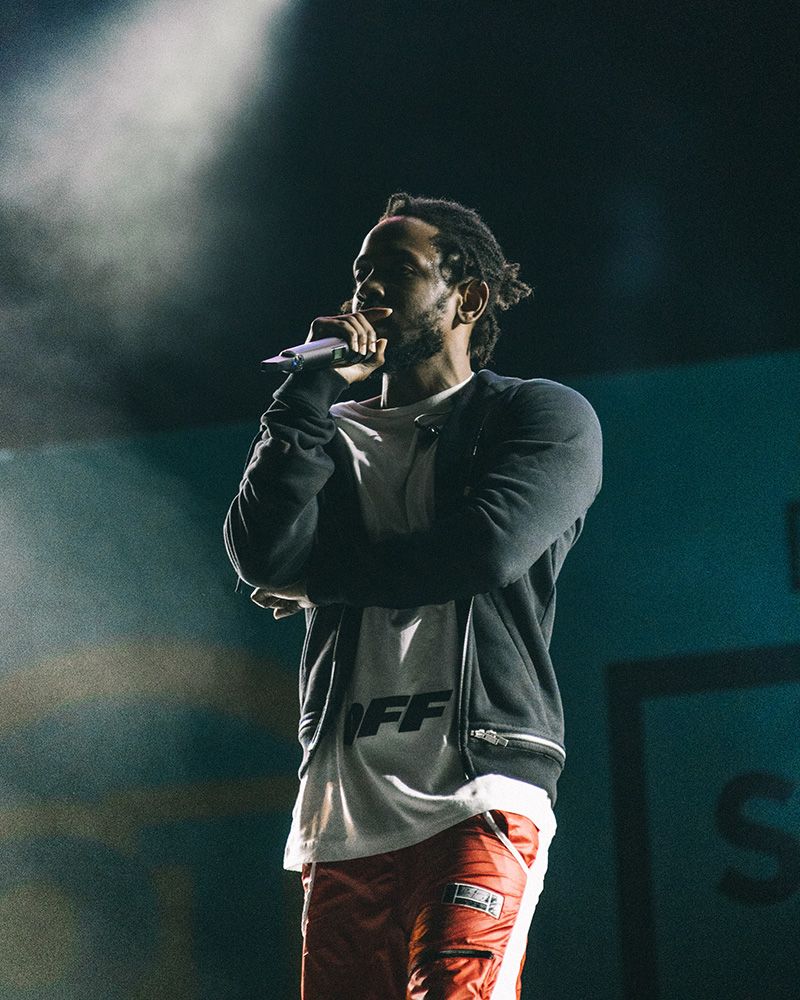 Kendrick Lamar was born and raised in Compton, achieving critical and commercial success with albums good kid, m.A.A.d City and To Pimp A Butterfly released in 2012 and 2015 respectively.

Under the name K. Dot, Lamar released his first mixtape as a teenager in 2003 and followed it with another two mixtapes in 2005 and 2009 before releasing Overly Dedicated in 2010 as Kendrick Lamar.

After signing with Dr. Dre’s label Aftermath Entertainment in 2012, Lamar released “m.A.A.d City” that debuted at number 2 on the Billboard 200 charts and led to seven nominations at the 2013 Grammy Awards including best new artist and best album (although he took no wins).

His 2015 album broke the Spotify record of streams within the release week, and even received recognition from former US President Barack Obama.

Lamar continued his artistic career with notable musical contributions including winning the Pulitzer Prize (the first non-jazz and classical album to be awarded the music prize) for his 2017 album DAMN., and having produced and curated the soundtrack for the box office smash hit Black Panther in 2018.

Where is Kendrick Lamar from?

Kendrick Lamar’s parents moved to Compton from Chicago with hopes to escape the latter’s gang culture, bringing Lamar into the world on June 17, 1987 in California as a result.

Lamar’s father was rumored to be a former member of street gang Gangster Disciples, and his mother allegedly named him after the American singer Eddie Kendricks from The Temptations.

What awards has Kendrick Lamar won?

Lamar is additionally the first non-classical or jazz musician to win the Pulitzer Prize for DAMN. in 2018.

How much is Kendrick Lamar worth?

Lamar has amassed over $78.5 million since 2012. His current net worth is estimated to be $45 million, and Forbes listed him as the 6th richest rapper in 2017 only falling behind by Chance The Rapper, Dr. Dre, Jay Z, Drake and Diddy.

What made Kendrick Lamar famous?

While rapping under the name of K-Dot, his mixtapes brought him to the attention of rapper, record producer and entrepreneur Dr Dre.

After releasing his debut album good kid, m.A.A.d City in 2012 to great acclaim, Lamar’s career took off and was followed successfully with To Pimp a Butterfly in 2015 and DAMN. in 2017.

Kendrick Lamar Duckworth is born in Compton, California on June 17.

Kendrick Lamar is crowned “The New King of the West Coast” by Snoop Dogg, the Game and Dr. Dre.

Kendrick Lamar raps on Big Sean’s single “Control,” and calls out several rappers by name, prompting countless responses and diss tracks from artists around the world.

After not winning at the 2014 Grammys, Lamar celebrates receiving two Grammys for ‘i’; Best Rap Song and Best Rap Performance.

Kendrick Lamar is nominated for 11 Grammys including Album of the Year, Song of the Year, Best Music Video and Best Rap Album.

Lamar drops DAMN., featuring the single “Humble” that becomes Lamar’s first number one single to hit the US Billboard Hot 100.

Lamar produces and curates the soundtrack for Black Panther, and includes songs in which Lamar collaborates with Jay Rock, SZA, Future and James Blake

DAMN. wins the 2018 Pulitzer Prize for music, becoming the first non-jazz and non-classical musician to do so.

Lamar makes his acting debut as a Dominican drug addict named Laces in the drama Power.

14 Feel Good Songs That Would Have Saved Me from Vecna
CulturesponsoredJuly 22, 2022

Buttcracks to BTS: The Most Viral Moments From the SS23 Men’s Shows
StylesponsoredJune 28, 2022