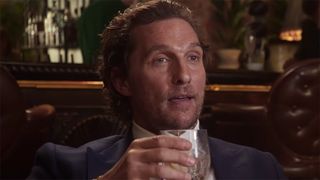 Guy Ritchie appears to be getting back to his bread and butter following Aladdin, as today we get our first look at the renowned filmmaker’s new crime comedy, The Gentlemen.

Matthew McConaughey leads a star-studded cast in The Gentlemen, portraying Mickey Pearson, an American expat who has built an extremely profitable marijuana empire in London. Pearson is looking to get out of the business, however, and when word gets outs, all hell breaks loose as plots, schemes, bribery, and blackmail ensue in attempts to encroach on his territory.

Jay & Silent Bob Are Back in Star-Studded ‘Reboot’ Trailer
MoviessponsoredJuly 18, 2019