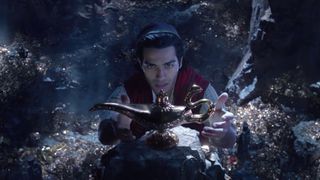 Disney continues to tease its forthcoming live-action remake of Aladdin ahead of its release next month.

The new ad is full of dramatic, sweeping shots of deserts, crypts, the mythical city of Agrabah, and a newly wished-up Aladdin entering the city as a prince. The clip also features more shots of Will Smith as the Genie.

Aladdin is hitting theaters on May 24.

Listen to Will Smith & DJ Khaled Remake “Friend Like Me” for New ‘Aladdin’ Soundtrack
MusicsponsoredMay 23, 2019