Three months into his first year at law school and after hours spent questioning his own motives, rapper Kelvyn Colt decided to quit his university course midway through class, walking out for the last time. Despite being the first person in his family to go to university, he didn’t view the decision as a failure, rather a step ahead.

Such bold moves mean making hard decisions and taking risks, even when things seem to be going right. In the case of New Balance’s 574S, that meant redesigning an already popular sneaker with almost 30 years of history to give it a contemporary new edge. In the spirit of the 574S’s boldness, we’re telling stories of those who’ve seized the moment and capitalized on opportunities. You can watch Kelvyn Colt tell his inspiring tale in our latest video and then read below for a more detailed look at his unfolding story. 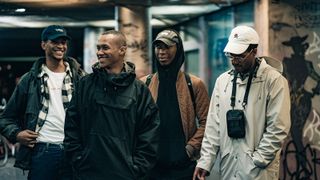 Kelvyn Colt grew up in Wiesbaden, South West Germany. As the son of a German mother and Nigerian father, he struggled to find his cultural identity and music became a source of empowerment. “As cliché as it might sound, music literally saved my life,” he explained. “I was listening to Tupac and Kid Cudi and the positive energy they gave me saved me from mistakes.”

Colt had written poems and stories from a young age and started applying these to hip-hop beats in his teens. Knowing what music had done for him personally and the productive path it led him down, Colt wanted to channel the energy and make music that touched people in the same way. He was thrown off course, however, by an exciting opportunity from a law school that he felt he couldn’t turn down.

Being the first person in his family to go to university, it felt like not just an opportunity, but an obligation. In reality, however, it was a distraction from his true calling as an artist. “In the beginning, I was very excited,” Colt explained. “But after a few weeks, I started realizing it wasn’t what I wanted to do, it wasn’t going to make me happy for the rest of my life and I couldn’t keep doing it every day.” Three months in, he made the decision to quit the course. If he was going to embody his own definition of success, he had to find something he loved doing.

“If you love business, then you’re going to be a great business person. If you don’t love business, don’t go into business. Do what you love but work hard. Work very hard, otherwise, it’s not going to take you anywhere.” – Kelvyn Colt

Contrary to perceived logic, it was turning away from one immense opportunity that would open the door to another. Colt moved to London with little money and no network to take up another course, and it was here that his music career really got moving. “I had a one-way ticket to London, the flight number was LH914, and taking that flight was probably the best decision I’ve made in my life,” he explained.

In the UK, Colt found a place where his music and lyrics resonated. He also found a university course in business entrepreneurship that allowed him to juggle business studies with music making, which meant he could learn about the business side of the music industry while mastering the art. After graduating, he set up a digital and social media consulting business working with brands, startups, and corporate clients — these days, this and music is what takes up his time.

Colt is still in the earliest stages of his career; he’s still got some grinding to do and critics to prove wrong. But he doesn’t regret the risk he’s taken: “It’s been more than worth it so far. Not just because of the money I’ve made, or the crazy places I’ve been to, or the people I’ve met, but because I’ve been able to provide for those that I care about, including myself.”

The artist’s next big move is releasing his new EP, LH914 (that’s the life-changing flight number that took him to London), on November 10. The first track “Moon” is available now and you can listen below. Find more of Kelvyn Colt’s music over on Spotify, and keep up to date with his movements on Instagram. Watch our film with New Balance, above, to see his story. Find out more about the New Balance 574S via the link below.