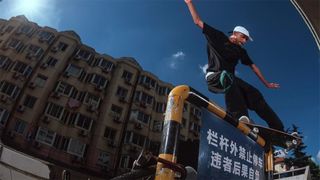 After taking over Paris for Oh Là Là Paname, adidas Skateboarding continues to churn out the skate edits, this week premiering Shen City Peaks. The film finds team rider Brian Peacock hitting his home turf for a bit of shredding.

A post shared by adidas Skateboarding (@adidasskateboarding) on Nov 15, 2018 at 6:53am PST

Alongside Peacock, adidas Skateboarding’s latest edit features the likes of Rodrigo Teixeira, Lucas Puig, Jenn Soto, and Mariah Duran, as we see the Three Stripes crew landing some insane tricks in the streets of Shanghai. After watching the film above, see underneath to revisit some of adidas’s pervious skateboarding clips.

It’s all in the technique /// @rodrigotx switch feeble grinds for an upcoming 🎬 feature in Shanghai 🇨🇳 dropping Nov. 15 #adidasSkateboarding | 📸 @zandertaketomo

A post shared by adidas Skateboarding (@adidasskateboarding) on Nov 12, 2018 at 7:23am PST

Up next, see the cast of ‘Mid90s’ land fan-requested skate tricks.