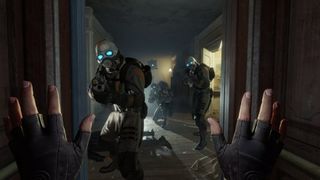 Valve is about to make every 2004 gamer pick up a VR headset come March. The famous game developer and creator of the classic game series Half-Life is back with an unexacting sequel, Half-Life: Alyx.

Since the 2007 smash hit Half-Life 2: Episode 2, the entire gaming community has been patiently waiting twelve years for the third installment. After years of silence, Valve finally announces the next Half-Life game, but it’s a VR title.

So far, there’s been a mixed reaction from fans on social media. Some excited to jump back into the world of Half-Life, while others are disappointed that they need a VR headset to do so.

Today, Valve dropped an extremely impressive trailer for the title, which will take place between the events of the first and second Half-Life games. Its story will revolve the eponymous Alyx Vance and her father Eli as they work to organize a resistance against the Combine.

“Everyone at Valve is excited to be returning to the world of Half-Life,” says Valve founder Gabe Newell in a press release. “VR has energized us. We’ve invested a lot of ourselves in the technology. But we’re also game developers at heart, and to be devoting ourselves to a VR game this ambitious is just as exciting.”

Half-Life: Alyx runs on the Source 2 engine, and will be playable on Steam via all PC-based VR headsets. This includes Valve’s Index VR headset and HTC Vive, but also Oculus Quest with a PC link cable and Microsoft’s Mixed Reality headset. Sorry, console players, better luck next time!

Valve’s Half-Life: Alyx will release on March 20, 2020. Pre-order the game here. Are you excited for a Half-Life VR title? Let us know in the comments.