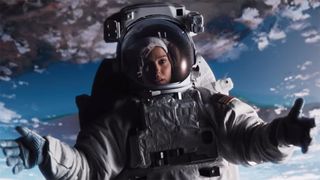 Brad Pitt isn’t the only one with a new space epic on the way, as Natalie Portman stars as troubled astronaut Lucy Cola in Noah Hawley’s upcoming drama/fantasy, Lucy in the Sky. Earlier this year we got our first look at Portman in the anticipated film, and now Fox Searchlight shares the first full-length trailer for the picture.

In Lucy in the Sky, Portman’s Lucy Cola becomes so moved by the otherworldly experience of witnessing life from afar that she grapples with her own reality upon returning home from space. Now, she will stop at nothing to get back to the place where she insists her life has more meaning.

Jon Hamm, Dan Stevens, Zazie Beetz, Pearl Amanda Dickson, and Ellen Burstyn star alongside Portman in Lucy in the Sky, which is directed by Noah Hawley and written by Brian C Brown, Elliott DiGuiseppi, and Hawley. The film is due out in theaters October 4.