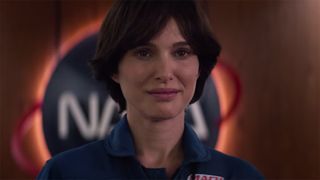 Today we get our first look at Fargo writer Noah Hawley’s feature film directorial debut, Lucy in the Sky. The sci-fi drama stars Natalie Portman, as she portrays Lucy Cola, an astronaut struggling with her return to Earth.

Lucy in the Sky is based around the theory that astronauts lose touch with reality following lengthy periods in space. This is exactly what Portman’s character, Lucy, is dealing with in the film.

Dan Stevens plays Lucy’s husband in Lucy in the Sky, while Lucy is having an affair with a fellow astronaut, played by Jon Hamm. Hamm is then sleeping with an astronaut trainee as well.

Zazie Beetz, Nick Offerman, Tig Notaro, Ellen Burstyn, Colman Domingo and Joe Williamson also feature in the movie, which is due out later in 2019.