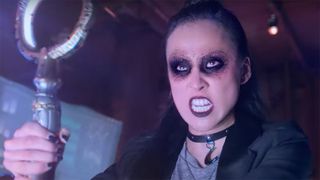 Today Hulu shares the teaser trailer for season three of Marvel’s Runaways just in time for New York Comic Con. The set of 10 new episodes will premiere on the subscription service in December.

Season three picks up as the Runaways are searching for their captured friends Chase, Gert, and Karolina. All the while, they are forced to combat an unstoppable enemy who is fixated on the child Leslie is carrying. Upon being lured into a dark realm by Nico, the Runaways come face to face with their toughest adversary to date in the form of a ruler named Morgan le Fay, played by Elizabeth Hurley.

Marvel’s Runaways follows a group of kids who have left their homes and evil parents behind. They are forced to rely on one another as they fight to survive, ultimately joining forces to take down PRIDE once and for all.

Netflix’s Disturbing ‘Dark’ Is Coming Back With a Terrifying Second Season
MoviessponsoredApril 26, 2019
What To Read Next
Load More
Search Results
Load More