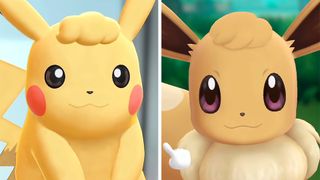 Later this year, The Pokémon Company and Nintendo will be releasing two new Pokémon titles, Pokémon: Let’s Go, Pikachu! and Pokémon: Let’s Go, Eevee!. Ahead of the launch, today we get a closer look at what to expect from the role-playing games.

Pikachu and Eevee won’t be evolving in these contests. Instead, the characters will travel on their trainer’s shoulder or head, free from their Poké Balls. You’ll be able to pet, feed, and tickle your Pokémon, in addition to changing their hairstyles.

Trainers will also have the opportunity to challenge one another and trade Pokémon. In addition, two people can play simultaneously on one system for the first time.

For more on Pokémon: Let’s Go, coming to Nintendo Switch November 16, press play above, then follow here for more in depth details.

In other video game news, here’s everything you need to know about ‘Fortnite’ season five.