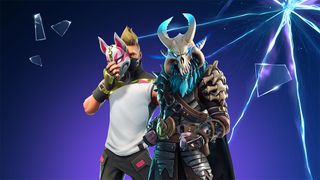 Fortnite season five is available as of today, and Epic Games has pulled out all the stops. A number of changes have been added to the map, including a viking ship, desert outpost, and ancient statues, all appearing on the island. In addition, you can take advantage of the game’s first four-person vehicle, the ATK (All Terrain Kart), and explore countless new locations.

Below we’ve highlighted the most important updates from Fortnite season five, which you can further investigate in detail courtesy of the v5.0 patch notes page.

Due to a drought in the Moisty Mire, a desert outpost has surfaced, filled with loot and “endless opportunity.” New locations can be found all throughout the island, including Paradise Palms and Lazy Links, as well as a few unnamed POIs have also appeared across the island.

This season’s Battle Pass features over 100 new rewards, currently available in-game for 950 V-Bucks. You can partake in various activities including basketball and golf, and even make up your own game with all-new toys.

Upon receiving two exclusive outfits instantly, you’ll be able to level up to earn up to 100 rewards worth over 25,000 V-Bucks. Much like previous installments, competing in Weekly Challenges will help you level up and earn rewards faster, as well as uncover exclusive rewards.

Shotguns will indicate how many pellets hit, while the adjusted shotgun spread patterns are consistent, with no random variation. Now, the heavy shotgun fires 10 pellets as opposed to five, and after firing a shotgun, another cannot be fired for a short period of time.

The knockback strength on grenade, sticky grenade, grenade launcher, and rocket launcher have all been lowered.

As previously mentioned, the All Terrain Kart (ATK) has room for your entire squad. You can get a speed boost after drifting, and all the while, the roof acts as a bounce pad. Rear passengers can then aid in jumping over obstacles.

The map has also been updated introducing a new biome (desert) and new locations (Paradise Palms and Lazy Links). Unnamed POIs appear across the island as well.

While the center of storm circles 7, 8, and 9, you can now shift in random directions, as opposed to shrinking.

Progressive challenges can be completed at your own pace beginning in season five, by acquiring a fixed amount of XP. In addition, weekly challenges are categorized by free and Battle Pass, with the initial three being available for free, while the remaining four are solely offered if you own a Battle Pass. Also, earn XP for reviving teammates in 50v50 and teams of 20 LTMs up to three times per match (30XP, 10XP, 10XP).

Ambient audio has been added to the desert biome, with more unique sounds coming in future updates. Battle Pass Challenge success sound has been lowered, while UI audio has been subject to a redesign, including all button and interface sounds.

The same sound visualizer can be enabled on all platforms that were created for mobile, but while the visualizer is enabled, audible sound effects will be muted. In addition, Extra audio and visual fanfare has been added to the Victory Royale end of match sequence.

Zooming in and out of the map is now twice as fast, while faster animation for displaying XP sources have been added as well.

You can find “Camera type” localized in the view settings header.

You can now take advantage of Autofire on mobile platforms, causing a player’s weapon to fire automatically when the reticle is over an enemy that is within range. After shooting, you can choose your preferred fire mode by navigating to Options, Custom HUD Layout, and tapping “Select Fire Mode.”

In addition to updates to Battle Royale, Fortnite season five also introduces a revamped Save the World mode. For more on these features, head over to Epic’s website.

We Did Everything but Go Outdoors in This Season’s Best Hiking Pants
SelectssponsoredApril 27, 2020