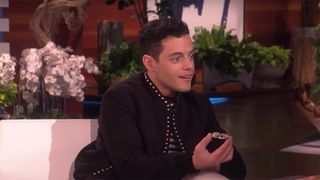 New Queen biopic Bohemian Rhapsody is officially in theaters, as the cast and crew are making their rounds in promotion of the film. Subsequently, Rami Malek, who portrays the iconic Freddie Mercury, stopped by The Ellen DeGeneres Show this week to discuss the movie.

While we’ve already seen Malek’s transformation into Mercury, here the actor further details what it was like playing such a legendary musician. After speaking on immolating Freddie’s movements, as well as his singing, Malek informed Ellen what he did with his Freddie Mercury teeth.

To hear the 37-year-old entertainer speak on turning the teeth into a gold grill, press play above. Again, Bohemian Rhapsody is now in theaters.

Up next, see Natalie Portman portray a struggling pop star in the ‘Vox Lux’ trailer.

Rami Malek Reportedly Being Cast as the Next James Bond Villain
MoviessponsoredFebruary 28, 2019