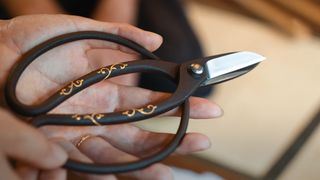 Bonsai, for those who are unaware, is a traditional Japanese art form of trimming and cultivating small trees that are placed in containers in order to mimic the shape of full-size trees. Here, we get a look at fifth generation scissor maker and master blacksmith Yasuhiro Hirakawa and his $35,000 Sasuke bonsai scissors.

Hirakawa, the only traditional scissor maker left in Japan, has been perfecting his craft for roughly five decades. Still utilizing ancient methods, his scissors can take over a week to create, four times longer to forge than the typical knife.

Bonsai scissors can be used for anything from food to trimming Bonsai. To see how this expert makes his most expensive pair, again costing $35,000, press play above.

In other design news, this insane German RV has a hidden sports car slot.

These Garish Beats x Graff Diamond Headphones Will Set You Back $750,000
DesignsponsoredJanuary 31, 2020