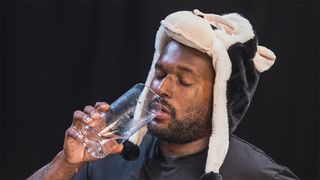 ScHoolboy Q continues to make his promo rounds in support of his most recent album, CrasH Talk, this week appearing on the latest episode of Hot Ones. An admitted spicy food fanatic, ScHoolboy breezes through the first several wings before getting smacked in the face by the heat of the latter sauces.

Here's @ScHoolboyQ blowing his high while eating the spiciest chicken wings in the history of existence https://t.co/FcbtHUZU34 pic.twitter.com/nB86qMQse0

During his time at the Hot Ones table, the TDE rapper dishes on not checking the internet for album reviews, talking shit while playing video games, and his preference between Apex Legends and Fortnite. He also delves into rappers getting caught up in their persona and not being themselves, how he makes his albums, and his unique relationship with his daughter. Additionally, a portion of the interview centers around Q’s recently developed golf obsession, which he says helped with his depression and has completely changed his life for the better.

To hear from ScHoolboy Q, and to see if he makes it through the entire Hot Ones challenge, press play above.

Ashton Kutcher Reveals He Just Threw Away All His Trucker Hats on ‘Hot Ones’
MoviessponsoredSeptember 27, 2019
Follow
Highsnobiety Music
What To Read Next
Load More
Search Results
Load More