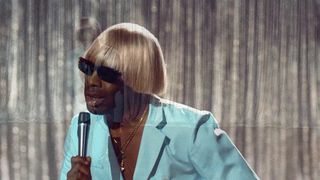 Tyler, the Creator‘s freshly dropped IGOR album has everyone losing their minds across the Internet. Of course, the mass hysteria wouldn’t stop him from sharing more material from the project as he has since unveiled a music video for “EARFQUAKE” starring Tracee Ellis Ross. The iconic actress plays the role of a quirky talk show host named Pearl Edwards. Tyler appears as a special guest performer with the “friendliest hair” and it doesn’t take long for the whole set to burst into flames from all the heat that he’s serving.