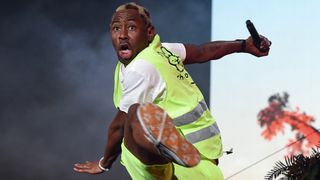 Tyler, the Creator is one agile performer, and fans lucky enough to attend his live shows will know that he commands the platform with gusto. As such, one fan on the rapper’s current North American tour managed to capture an exemplary moment in which his quick reflexes were put to the test.

During a rendition of “See You Again,” in Osheaga, Montreal, the rapper clambered up on stage to rile the crowd for the song’s drop. As the hype builds, one attendee lugs an unidentifiable object on the stage, which, Tyler, somewhat impressively catches and swats right on the drop cue.

As you can imagine, a number of fans totally lost it, marvelling over his impeccable timing and moreover, his swift hand-eye co-ordination. Check out the clip in question above and when you’re done, revisit the official video for “See You Again” below.

In other news, Rihanna and Donald Glover are rumored to be co-starring in a movie.

You Can Now Watch Tyler, the Creator Perform ‘IGOR’ in Full
MusicsponsoredAugust 17, 2019