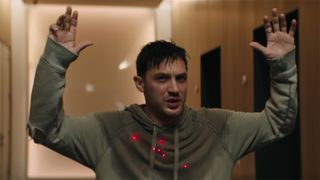 The highly-anticipated Venom film is premiering next week, and Sony Pictures has just released a new clip from the upcoming Marvel flick.

They’ve been warned. #Venom gets in on the action in this brand-new clip – watch it now and don’t miss it in theaters October 5th.

In the short video, Tom Hardy, portraying Eddie Brock, is surrounded by a SWAT team and urges the specialized enforcement unit to back down. Despite giving a warning, Eddie Brock calls for the symbiote to take action, transforming into Venom to take out the SWAT team with ease.

It’s worth noting that Venom hails from Sony’s Marvel Universe of characters and will not be a spinoff of the current Marvel Cinematic Universe. Just last month, Tom Hardy officially signed up for a Venom trilogy.

Now, in case you missed it, watch Tom Hardy bite someone’s head off in the previous ‘Venom’ trailer below. Also, if you didn’t know, Tom Hardy’s Venom was inspired by Conor McGregor.

Meet the New ‘Hellboy’ Characters in This Action-Packed Teaser
MoviessponsoredApril 2, 2019