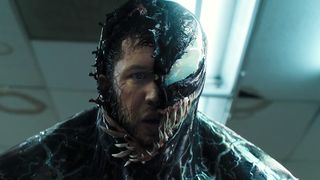 Don’t be confused by the mention of Peter Parker, though, this isn’t a fun follow-up to last year’s Spider-Man: Homecoming. Instead, we’re being given a movie that kisses goodbye to superheroes — or rather, one that will try to bite their head off, given the chance.

Kicking off with a menacing whisper that states, “We are Venom,” this CGI-filled three-minute trailer delivers insight into how Brock’s body and mind are quickly “taken” by Venom, and given glimpses of how this “new species” spreads, and what it wants.

Venom, which hits theaters October 5, also stars Michelle Williams, Woody Harrelson, and Riz Ahmed. In case you missed it, watch the first trailer for the film below.

Are you hyped for Venom? Share your thoughts in the comments.

In other TV and movie news, here’s everything coming to and leaving Netflix in August.