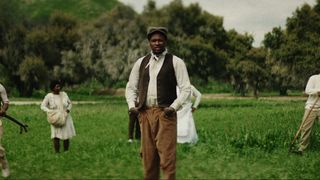 During YG‘s Coachella set, the rapper debuted a new diss track called “Stop Snitchin” while performing in front of giant pictures of Tekashi 6ix9ine and Skinnyfromthe9. Today, he unleashes the accompanying visual which follows the intense narrative of a slave snitching on his kin that have fled to the north for freedom.

In case you need a refresher, 6ix9ine and Skinnyfromthe9 were recently accused of ratting out their friends. The former was blamed for snitching on his co-defendants during his still ongoing racketeering case, and the latter for cooperating with the feds after being charged with kidnapping and assault.

This single serves as a preview for YG’s next album, 4REAL 4REAL, which is slated to drop on May 3. The project was initially pegged for an April 12 release but that date was pushed back following the death of his friend and collaborator, Nipsey Hussle.

YG Taps DaBaby for a Remix of “Stop Snitchin”
MusicsponsoredJune 10, 2019