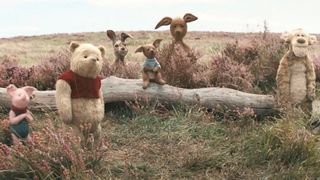 Sooner or later, the past catches up to you. ? Tune in to @TheEllenShow tomorrow for the all-new trailer for Disney’s #ChristopherRobin

While the first trailer focused on his old friend Winnie the Pooh, the new clip above highlights the rest of the beloved Winnie the Pooh characters with Eeyore, Piglet and Tigger, as they march from the Hundred Acre Wood to London.

Directed by Marc Forster, the film follows the now-adult Christopher Robin, who has lost his way, and now must rely on his childhood friends of lovable stuffed animals to reconnect him of the loving and playful boy who is still inside, after embarking on countless adventures in the Hundred Acre Wood. Overall, the iconic characters are just as we remember them, and made to look more lifelike.

Christopher Robin is slated to hit theaters on Friday, August 3.

In other new trailers, ‘Mowgli’ is remaking ‘Jungle Book’ in the darkest way possible.

‘Tenet’ Looks to Be Christopher Nolan’s Most Ambitious Film Yet
MoviessponsoredDecember 19, 2019