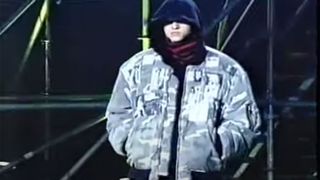 You’ve surely heard of Raf Simons’ legendary FW01/02 collection by this point, right? Well, if you haven’t, it’s time to get educated, as the full show is now available to watch online, courtesy of YOURFASHIONARCHIVE.

The iconic show arrived following a one-year sabbatical in which Simons taught at a design school in Vienna and consulted for a Belgian shipping magnate. Opening to the industrial sounds of The Process’ Skinny Puppy record, the collection of distressed hoodies, sleeveless flannel shirts, and oversized balaclava-like scarves was described by Vogue at the time as a “hyper-stylized collection of urban radicals.”

The reality is that presenting a casual hoodie on a pale and rake-like young model in a grungy warehouse was a divergence from the status quo of suits and technical tailoring. The concept of “youth” (a theme that Simons still revisits in just about every new collection) wasn’t associated with luxury high fashion brands in the way it is today.

Raf Simons FW01/02 has since been lionized as a pivotal moment in menswear that had a huge influence on the designer’s oeuvre and indeed the wider fashion landscape. Speaking to Swiss newspaper Neue Zürcher Zeitung at the time, Simons said, “At [a] flea market in Vienna, I saw youngsters from the Ukraine or Romania, who [layered their clothing] and thus [created] their own volumes because of the cold.” The references to youth culture and rebellion were essentially a blueprint for the wave of Gosha Rubchinskiy and Vetements wares that would arrive in the 2010s, almost 20 years before you could even conceive of wearing a luxury hoodie with Cyrillic script on it.

You can also clock the iconic Riot! Riot! Riot! patch camo bomber, once an object of obsession for Kanye West that was most recently seen on the shoulders of Drake in his “Toosie Slide” video, which points to the enduring relevance of this fashion show from nearly two decades ago.

Whether Layering Up or Revealing More, 8 Transparent Products to Shop Now
SelectssponsoredJanuary 8, 2020