Swatch and BAPE are both masters of collaboration. First collaborating with artist Kiki Picasso in 1985,
Swatch has worked over the years with legends such as Keith Haring, Vivienne Westwood, Damien Hirst, and Jeremy Scott.
BAPE, it goes without saying, has been even more prolific, touching almost every aspect of modern culture and
collaborating with everyone from Marvel to Google since the mid-‘90s.

Unsurprisingly then we were pleased to learn earlier this month that Swatch and BAPE are at last coming
together for a marriage of two OG collaborators and undeniably iconic brands. While today’s “collabs” are often
just another part of the news cycle — hyped today and gone tomorrow — Swatch x BAPE has been somewhat of a long
time coming and a collaboration we always hoped we’d see from two names with a history of killer partnerships.

To make the news more exciting, it’ll be Swatch’s all-new BIG BOLD model that gets the BAPE treatment as the pair
have come together to reimagine BIG BOLD in five city-inspired colorways and one global colorway.

To prepare for today’s global drop, keep reading to find out why this collaboration is noteworthy and check out
all six colorways.

Watch below to see more

It's been a long time coming…

Swatch and BAPE were among the first to master the art of collaboration — long before it became the driver of hype
that it is today — and collaborations have been vital to both brands’ success. Looking back, each collaboration
Swatch and BAPE have initiated represents a different chapter in their histories and captures something about
their brand identities at the time.

While many of BAPE’s collaborations in the last two years speak to the idea that streetwear has been more widely accepted into popular culture, Swatch’s tell a story of growing support for contemporary art movements and artists.

That said, the Swatch x BAPE collaboration has been a long time coming, significant in that it honors and validates
Swatch’s oft-forgotten affiliation with street culture, dating back to its days collaborating with graffiti artists
such a Keith Haring. For BAPE, the partnership is further evidence of the world’s growing obsession with streetwear
and the latest partnership highlighting the brand’s extensive cultural footprint.

In a nod to their origins and identities, the Swatch x BAPE collection features five watches inspired by locations significant to both brands — Tokyo, New York, Paris, London, and Switzerland — plus a global colorway. BAPE lends its signature camouflage pattern to the watchstrap and face of all six models in a unique combination of colors and, at closer inspection, each watch features the city names on its face and crown. 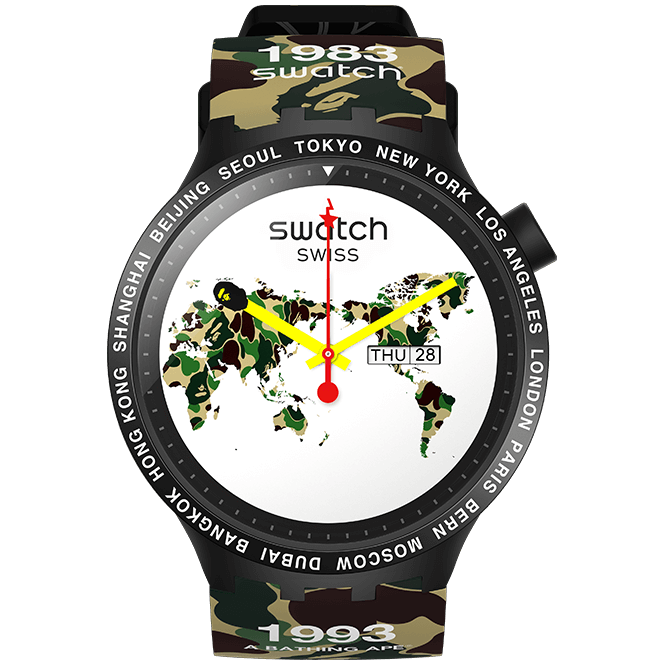 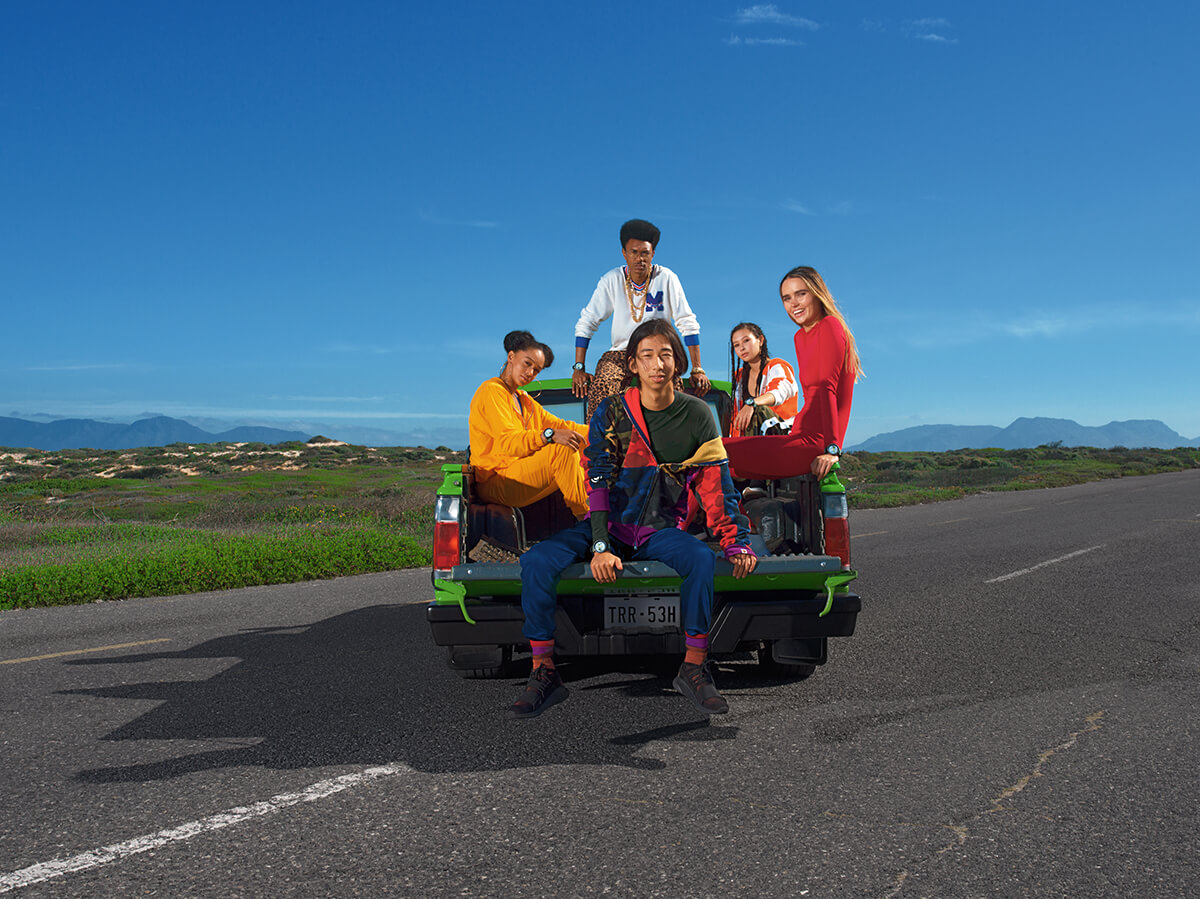 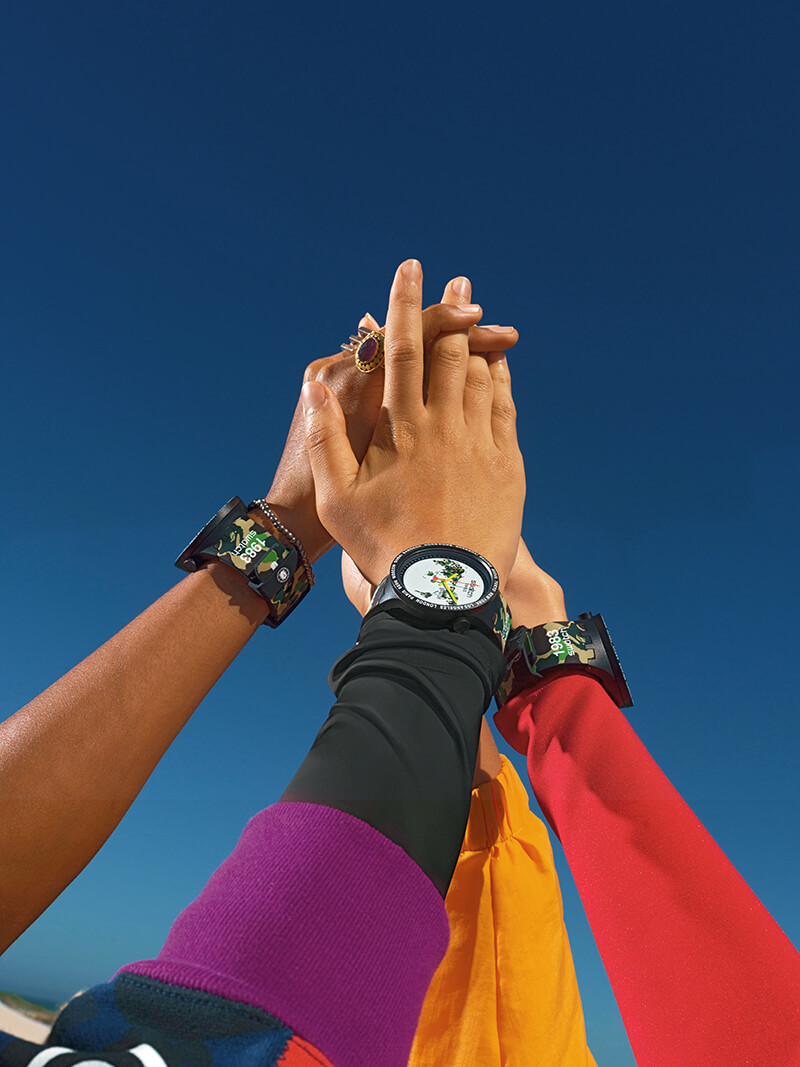 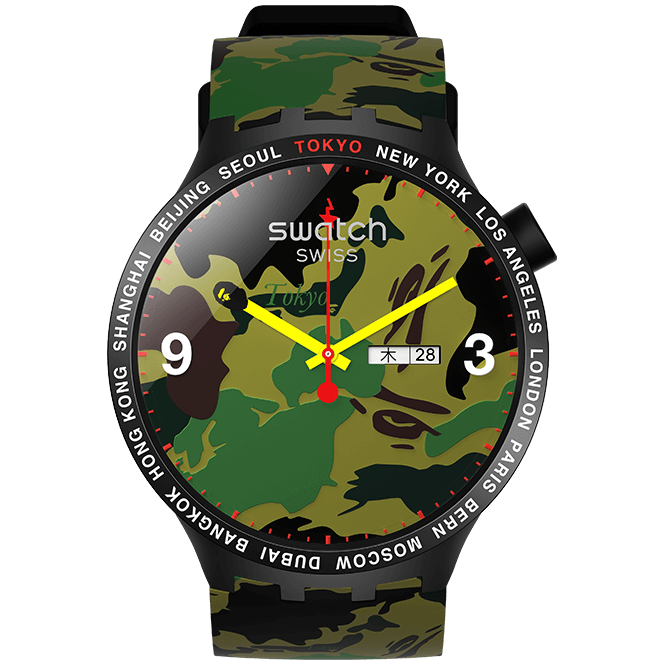 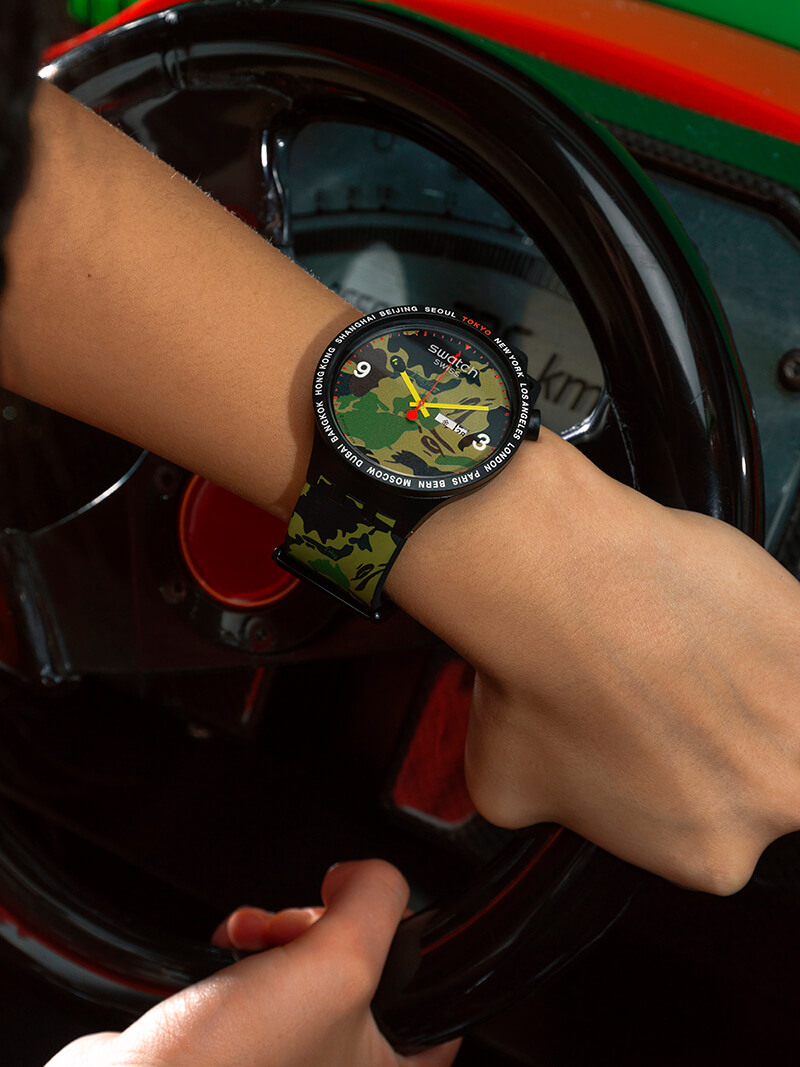 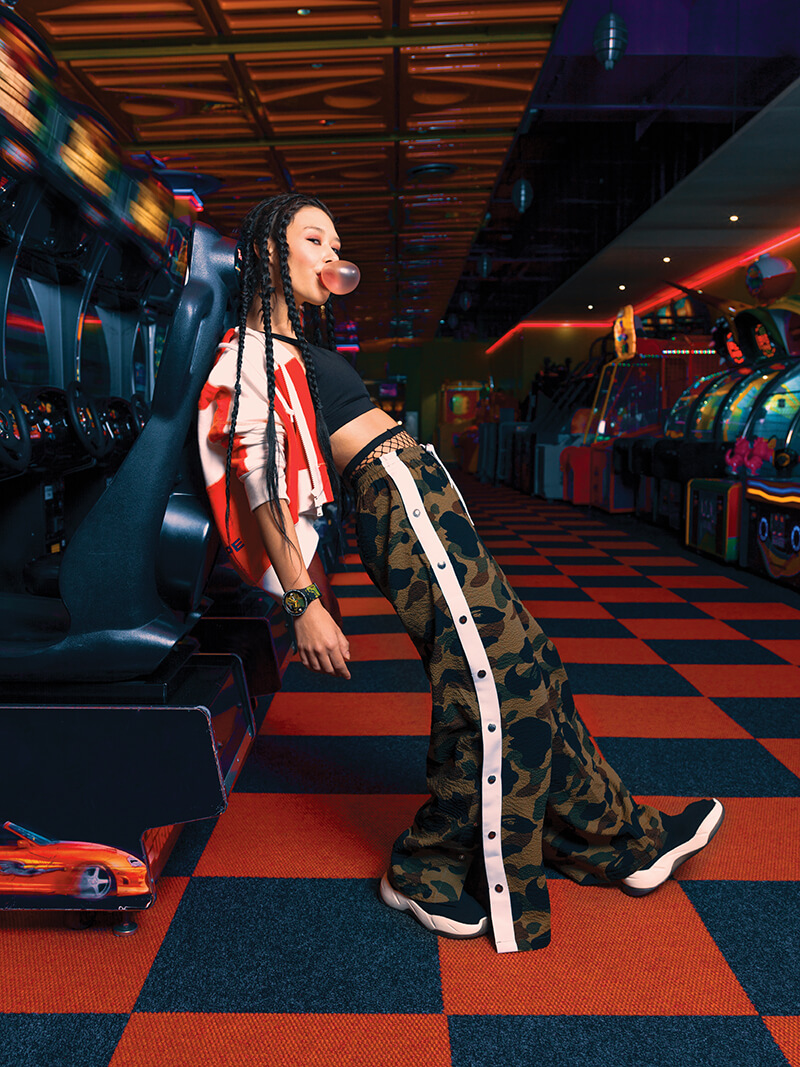 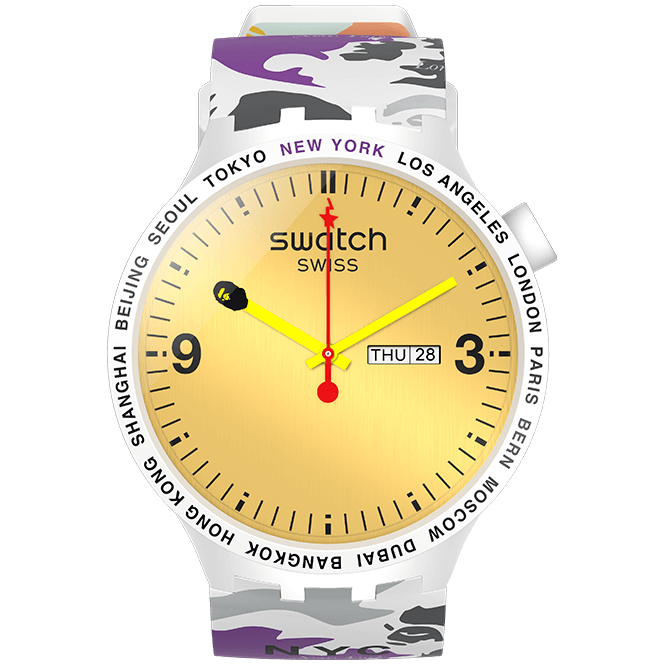 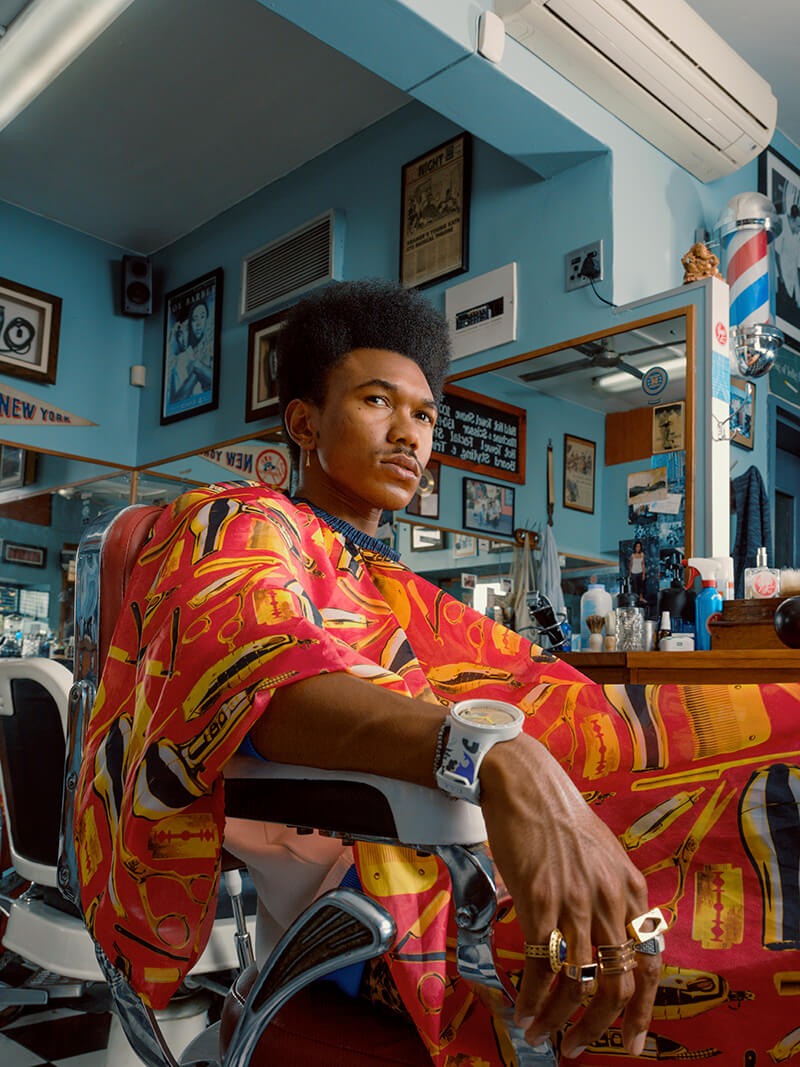 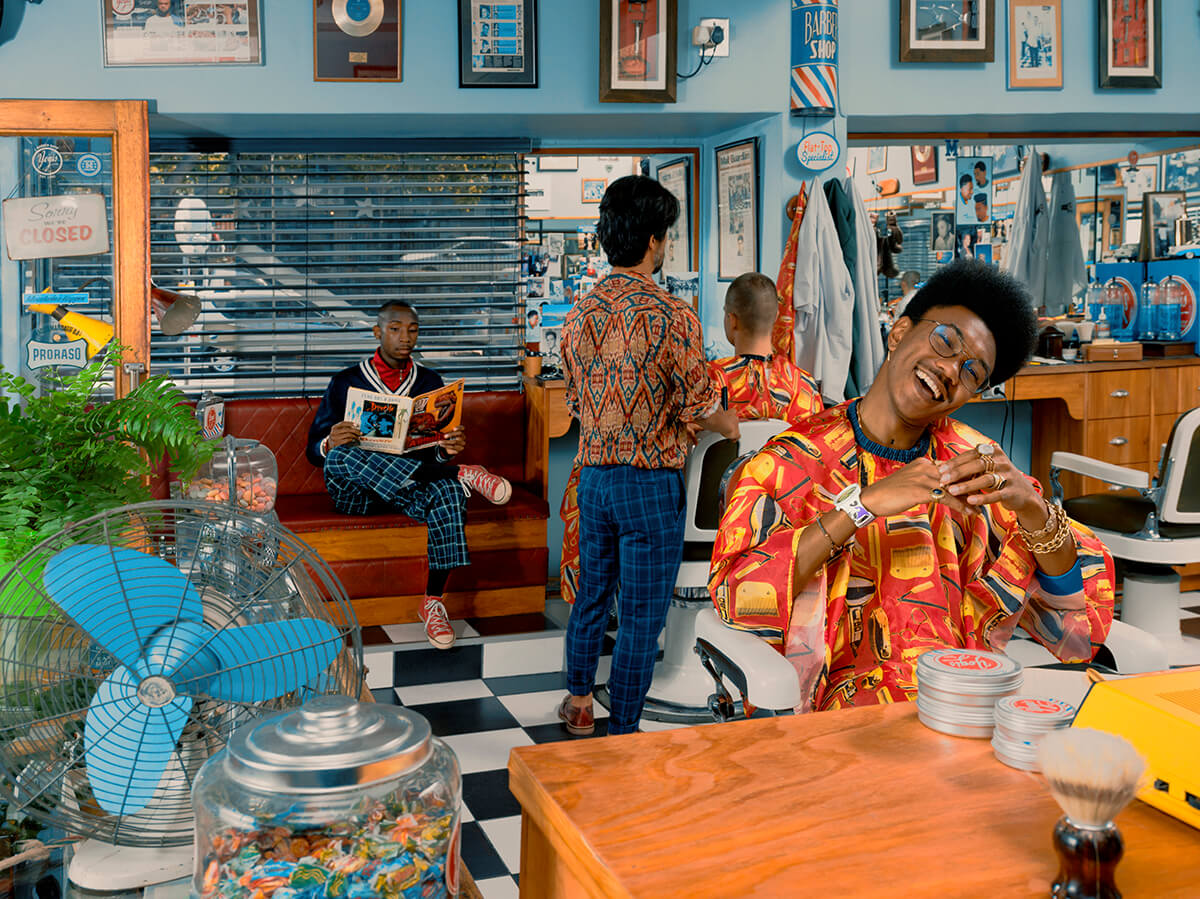 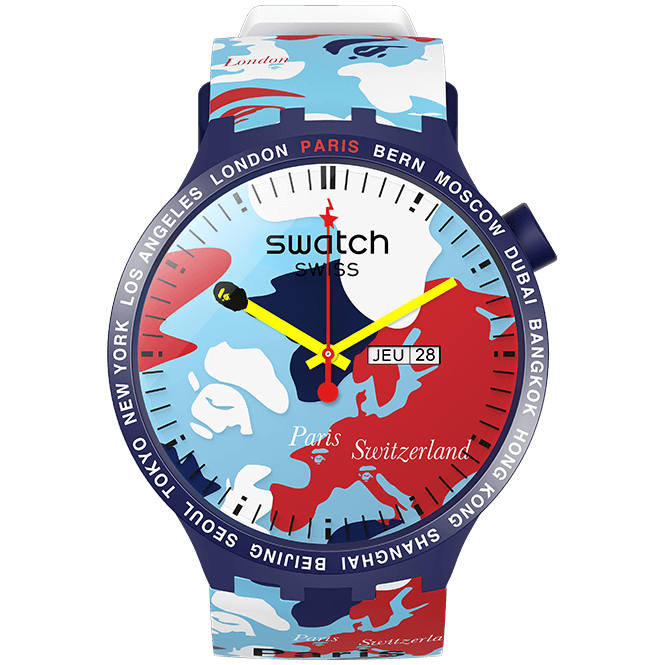 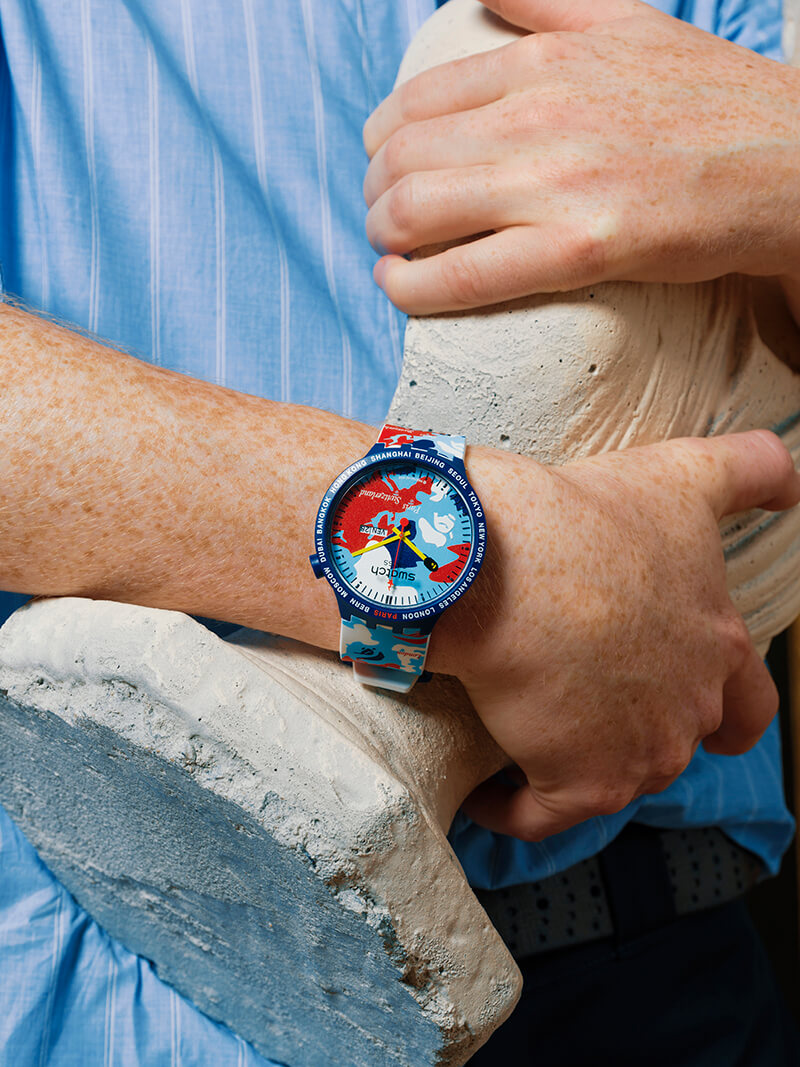 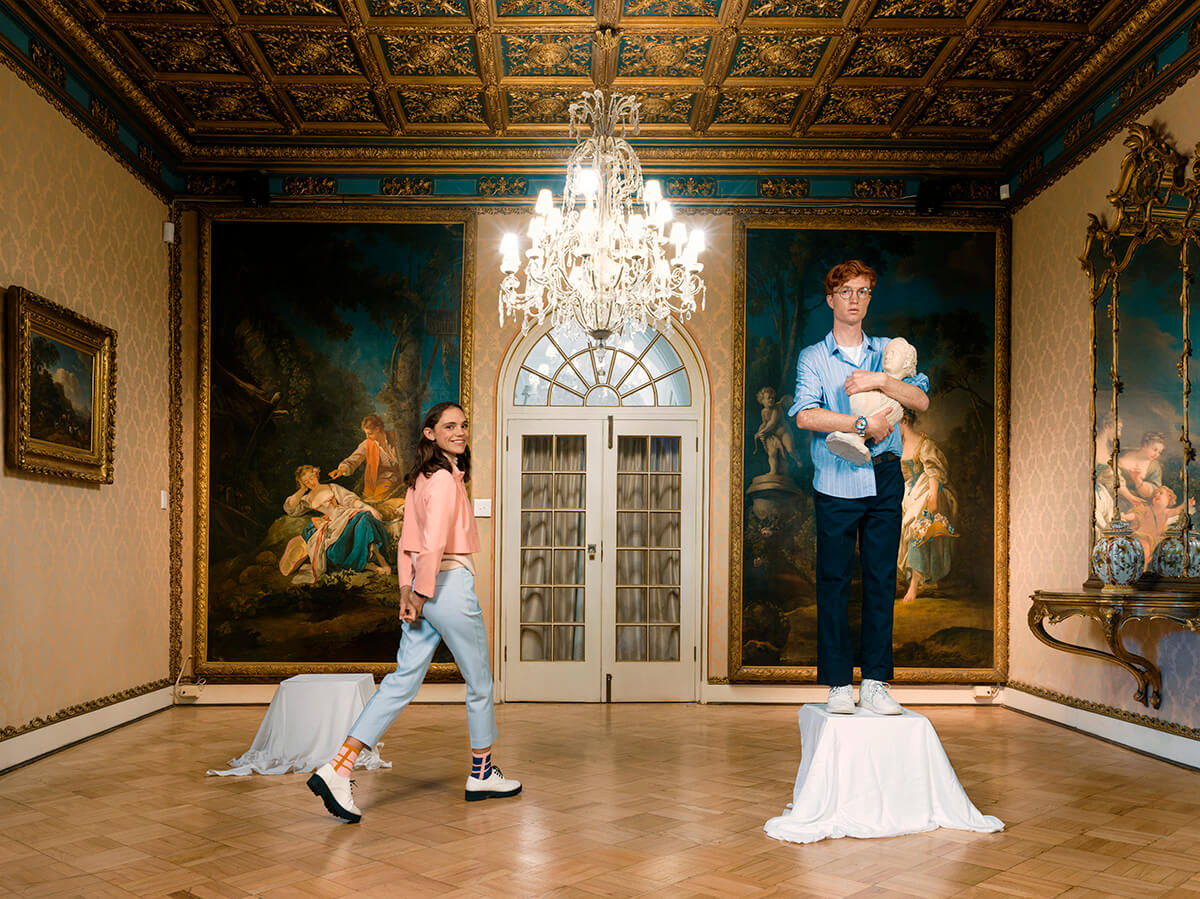 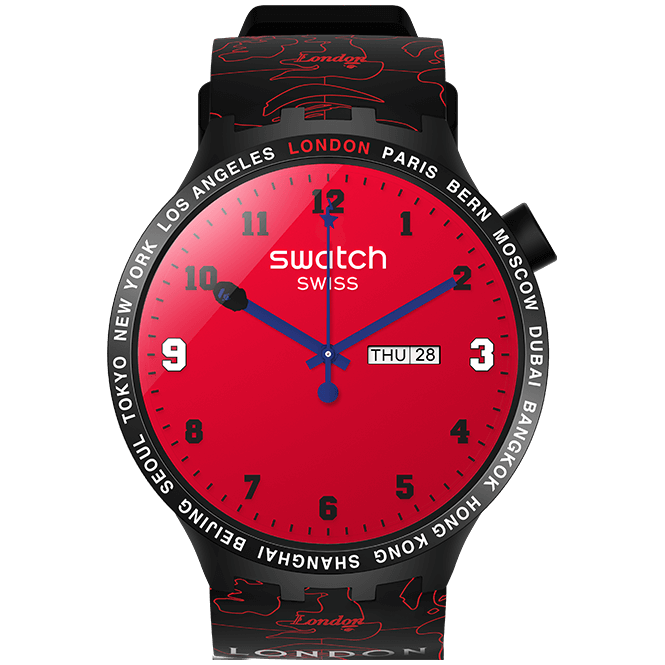 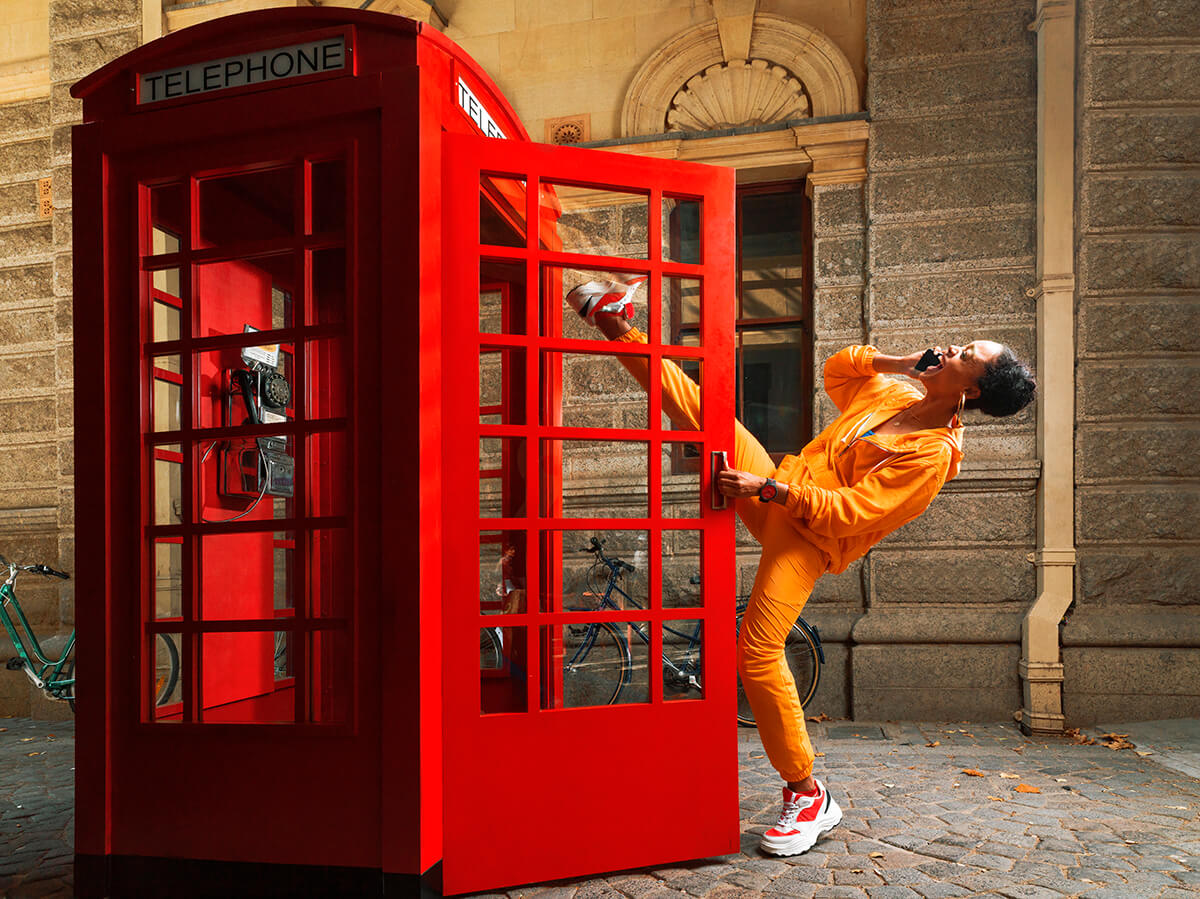 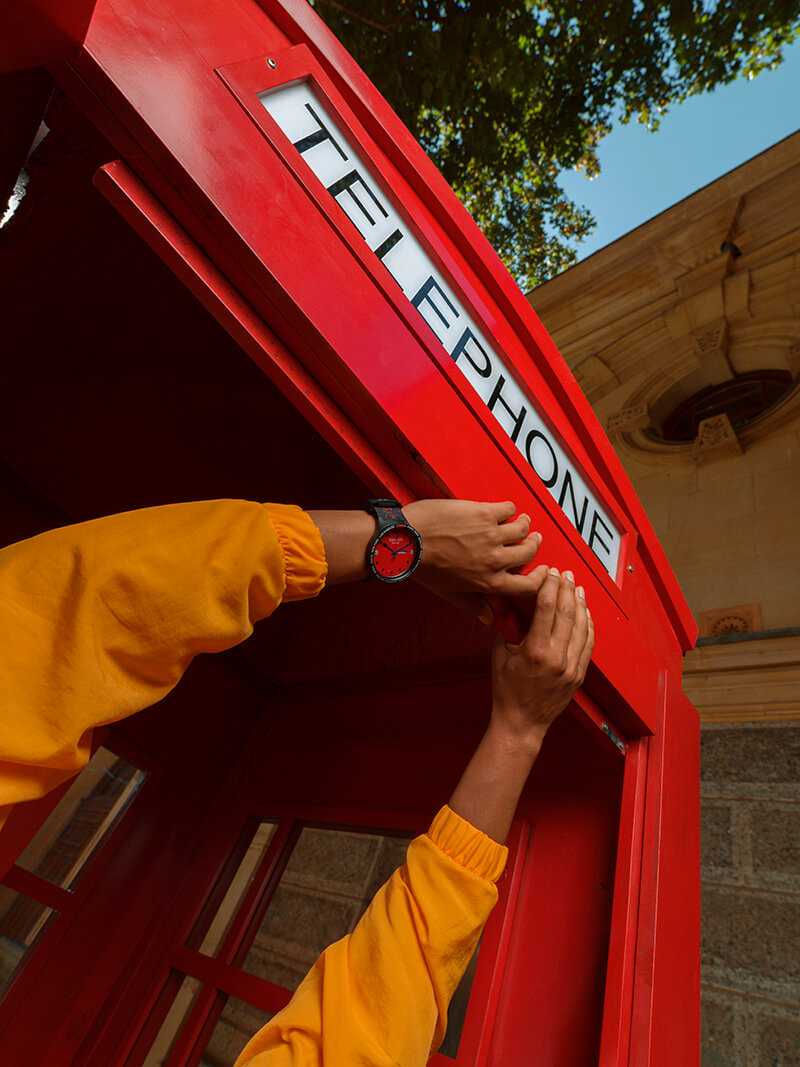 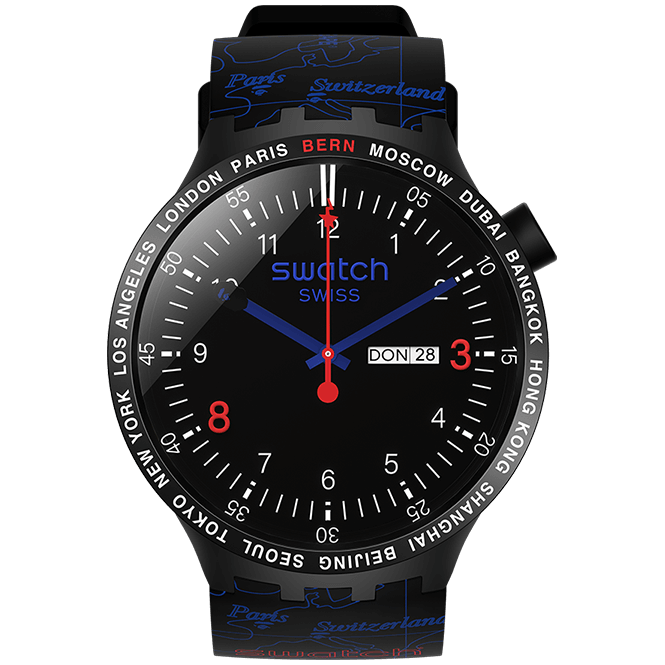 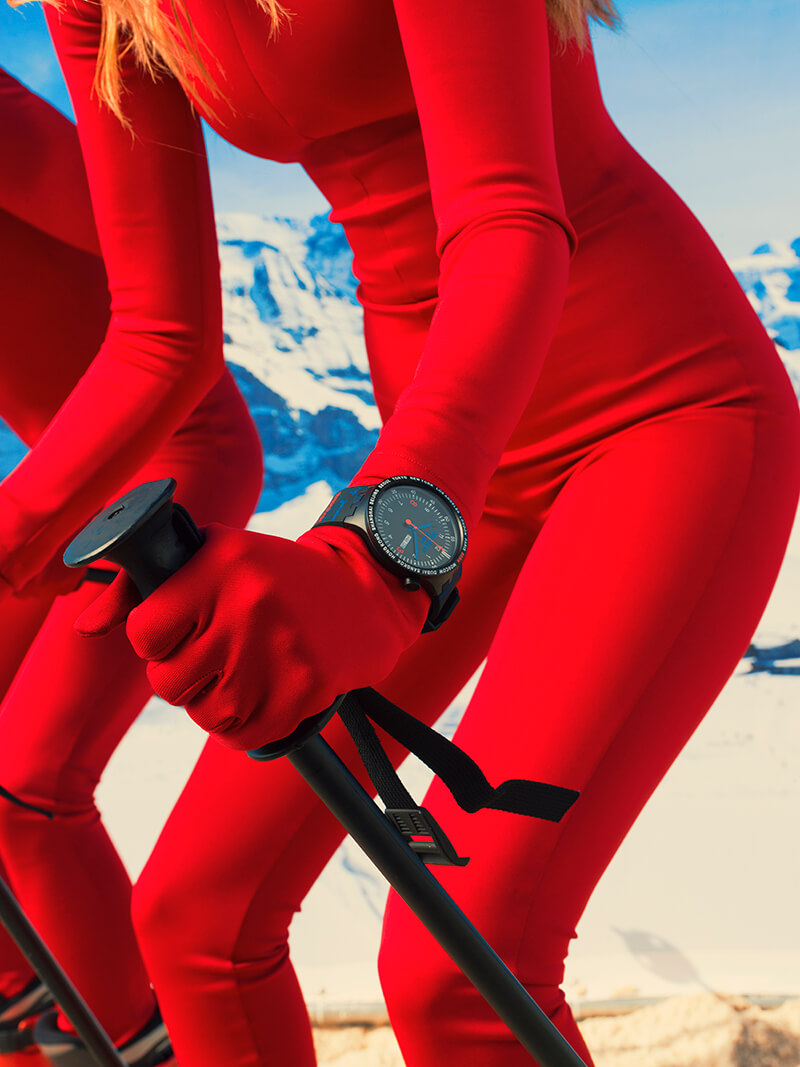 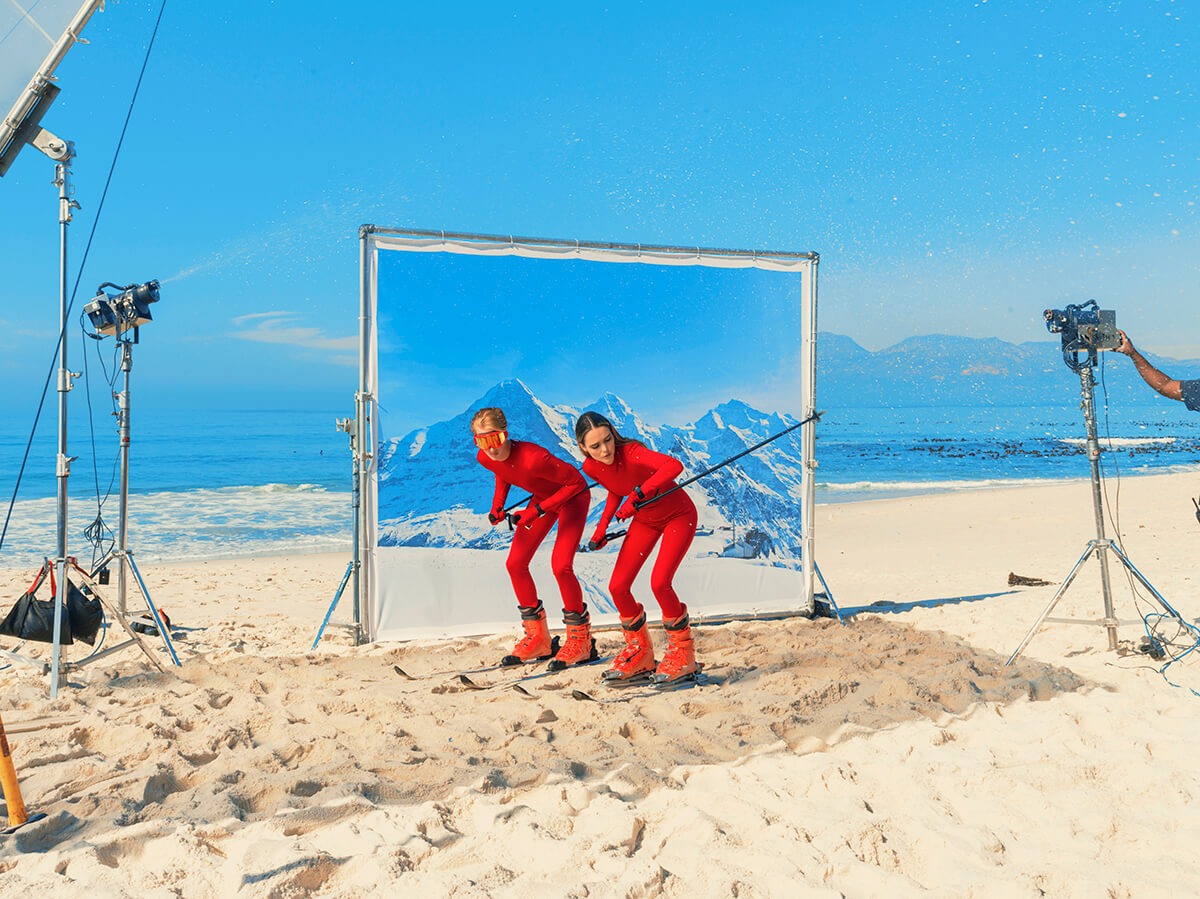