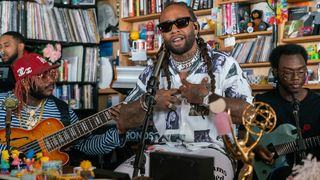 Ty Dolla $ign recently performed for NPR’s Tiny Desk Concert series alongside Thundercat. While the full concert hasn’t been released yet, NPR shared their intimate performance of “Cinderella” as a tribute to Mac Miller. The song was originally featured on the late rapper’s The Devine Feminine album which came out in 2017.

This special performance arrives on the anniversary of Miller’s 2018 own Tiny Desk set which Thundercat was also present for shortly before his death. Watch the touching tribute above and stay tuned here for the rest of the footage when it drops.

While you’re here, revisit our roundup of iconic Mac Miller songs that changed our lives.