With familial expectations of an academic path, director Yoni Lappin never imagined his love of music and film would ever lead him to a career working for some of today’s biggest artists.

Before fully exploring his passion for filmmaking, Lappin began working within the music industry. Being involved in music and working with artists, he says, goes hand-in-hand with directing – his understanding of the music helped him visualize and tell a story around it. Now, Lappin directs videos for a range of artists, from Mura Masa to Desiigner, while sticking to some of the constant themes and characters that make up the world within his videos.

Born in Israel and raised in London, Lappin says he from “all over.” Without too much self-analyzing, he jokes, it’s this constant movement that inspires his exploration of culture, identity, and youth through film, often circling back to the places that melded his own. “When you’re young, you feel like you can change the world,” he explains of the developing identity that often drives his work. From music videos of London’s gritty youth, to the progressive youth of modern day Israel in one of his short films, Lappin explores culture and identity through a dreamlike lens, and often to the beat of your favorite tracks.

We caught up with the director to chat about some of his current projects, how his hometown of London has shaped his work, and to figure out the artist he’s dying to work with next.

What do you do?

I am a director.

Where are you from and where do you live now?

London is my home, and I’m from, I guess, originally, Israel, but all over the world.

When did you first get into directing?

I first got into directing, working in music. I worked for artists and musicians. I was working in the record industry and stuff like that, through friends who were managing artists and that kind of thing. That’s how I got into it, by messing around with a 7D and doing low budget music videos.

So it all began with music?

I always wanted to be filmmaker, but I was scared to take it seriously for a long time. I went down a more academic path because it was more normal in my family to do that. Then, it was really when I was just so frustrated with academia, I started an MA and I dropped out. It forced me to figure out what I really wanted to do.

That’s when I started getting into music first and, through music, I was able to get a feel for directing. Because I understood music, I felt I could do something visual within that framework and speak that language.

You’re well known for your work with electronic artist Mura Masa, directing a handful of his videos. Is that the kind of music you’ve always been interested in directing videos for?

I’ve always really been into hip-hop, first and foremost. Hip-hop is my thing and my shit. Always has been, always will be. Mura Masa’s a really interesting artist, cause he’s hip-hop, but he’s not just hip-hop, he’s electronic, he’s everything. It’s just really undeniable music. It’s serious … to me it was always really serious music, but it also had this young pop sensibility to it at the same time, and a mixture of other genres. When I started directing for Mura Mass is really when I felt like I’d found something that worked.

Is your process for directing a video different depending on what kind of genre you’re working with?

No, it’s not different for me. It’s more just whatever feels right. I think I have themes that I subconsciously pick at.

What kind of themes do you tend to stick with?

I don’t know, I try not to analyze myself too much, but I think I’m definitely interested in young culture and people and identity, and things like that, snapshots of life, of reality and mixing that in a way that feels almost … you’re not really sure whether it’s reality or not.

I think subconsciously I realize that identity plays a big role in my work. You asked me where home is, and I don’t really know ’cause I’ve always moved around. I’ve grown up in London, but I’m not from London.

I just listen to the song, and I think what comes into my head in a very natural way, and that’s it. I don’t think too much about it. There’s no real process to that. Sometimes it happens instantaneously, sometimes it takes a few days. I just listen to it and go with what feels right.

Whether it’s Israel or London, do you feel that the places you call home impact your work?

Definitely. It all does. Israel, I moved when I was three, but culturally, it’s part of me, and being Jewish is part of me. London, as well, maybe more than anything, has influenced my work just because I started using it as a back drop. It’s a big city, I’ve always been interested in doing things with big cities. London definitely, maybe more than anything so far, has influenced my work. It’s given me an environment to work off of. The buildings and the architecture, those were my sets. London for sure.

What is it about youth culture that interests you?

I’ve always been interested where the world’s going, I find young people are at the forefront of that, always. I think that kind of vulnerability, almost, interests me, because it’s pure and honest. Most people, when they get to a certain age, unfortunately lose that. When you’re young, you feel like you can change the world and you can do what ever you want. That interests me. But I also was doing that because it worked with the music. Mura Masa’s a young musician and his music, I think, speaks for that feeling. Part of it was matching that. That emotion.

Your documentary Love the Time which depicts the youth culture in Israel is different from anything we’ve seen from you. How was that experience?

Do you think you’ll be doing more of that kind of film?

I’m doing one right now for Vogue. It’s on Sudanese models. I want to do a short film this year, hopefully. That’s really what I want to keep doing more of, as well as music videos and other stuff. I’m itching to do another music video.

Who would you love to create a music video for?

I’d love to do a SZA video. I’ve always wanted to do a Rihanna video. Frank Ocean would be great. I also don’t feel like I’ve really done a pure hip-hop video yet, and I’d love to do that.

Goals for the year?

For more of our interviews, read our chat with the one and only Waka Flocka Flame right here. 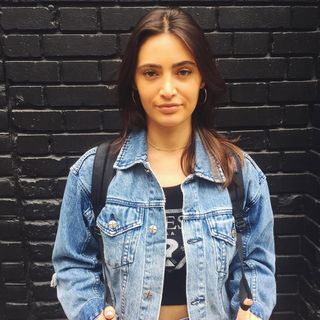