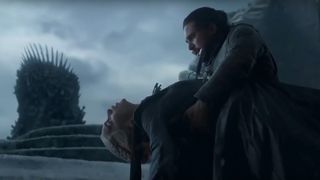 After 73 episodes and eight years, you’d be forgiven for losing track of every single character and plot point that got us to Sunday’s Game of Thrones finale. If you’re not planning on spending your summer rewatching the series or doing a deep dive into George R.R. Martin’s books, this handy compilation could be the 83 seconds of Game of Thrones nostalgia you didn’t know you needed.

The video anthologizes every single episode, from pilot “Winter Is Coming” to last weekend’s finale — although, given how divided fans have been about the show’s denouement, perhaps some would prefer to forget the latter.

But if you’re into relieving classic moments, take a look back through the series with some of the bloody, steamy, and heartwarming moments you might have forgotten, and remember some of the major characters who fell along the way.

This Epic Video Breaks Down Everything Wrong With The ‘Game of Thrones’ Finale
MoviessponsoredSeptember 10, 2019
What To Read Next
Load More
Search Results
Load More