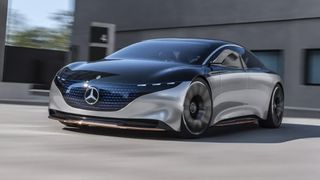 Mercedes-Benz is lighting up the electric car market with its new addition to its “EQ” family with the Vision EQS. The latest electric S-Class concept car, which was announced at the 2019 Frankfurt Motor Show, is aimed to lay the ground work for “thrilling, futuristic design for the EQ models from Mercedes-Benz” going forward.

Diving into specs, the Vision EQS is equipped with a 100kWh battery pack with an operating range of  700 kilometers (or 435 miles). With “more than 469 horsepower”, the concept car go from 0 to 60 miles per hour in under 4.5 seconds. It’s an impressive feat, but when compared to the Tesla Model S or the recently announced Porsche Taycan that can hit 60 mph in under 2.6 seconds, it’s a bit underwhelming. However, with a charging performance of 350 kW, the Vision EQS recharges the battery to 80% in less than 20 minutes, which is impressively fast!

Where the EQS really shines is in the design department. The model literally and figuratively light up the road with an illuminated grille, which houses 940 individual LEDs, and a continuous 360-degree illuminated strip of blue that contrasts with two- black/silver finish on the car’s body. There’s also 229 LEDs flushed on the rear of the model as well. It’s gorgeous!

Another great feature on the EQS is the evolution of Mercedes’ MBUX system with, “organically emerging displays and projection surfaces,” which Mercedes-Benz says can allow “digital content [to] be immersively experienced over the entire area.” It’s like a luxury yacht on wheels.

The new addition to the EQ family isn’t a performance knockout, but it’s attention to design and luxury experience something to behold. We’re excited to see what comes next from Mercedes-Benz. Watch the trailer for the Vision EQS in the video above.