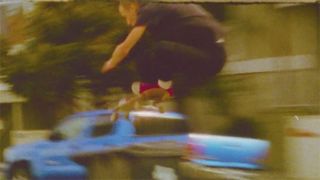 Berlin-based skater-turned-filmmaker Paul Herrmann has just released his latest skate video, titled I Thought I Was You. The clip takes you on a road trip across the United States, as Herrmann documented his recent trip to America.

Herrmann reiterated to us that the film centers around his three-month-long US vacation, which served as his first trip to the country. While in the states, he simply captured everything that caught his eye, simultaneously documenting his many friends that joined him on the journey. You’ll see that Herrmann chose to showcase New York in black and white, while scenes from Los Angeles appear in color.

Not too far removed from the German equivalent of high school, Herrmann is already building an impressive resume when it comes to photography and videography. To date, he has worked with the likes of Fendi, Vogue Germany, i-D, and more.

Press play above to check out the latest from Paul Herrmann, and be sure to hit him with a follow on Instagram to stay up to date on his exploits.