Created in 1980 by Wolfgang Müller and Nikolaus Untermöhlen, Die Tödliche Doris (The Deadly Doris) emerged in the margins of the West Berlin art and music scene. An experimental collective incubated in Schöneberg, seat of the avant-garde at the western edge of the wall, Die Tödliche Doris lived outside of the post-punk perimeter surrounding the city’s subcultures, inhabiting the aesthetic of the “Geniale Dilletanten” (“Brilliant Dilletants,” intentionally misspelled). At times Doris took form as a band, with a rotating membership and an anti-discography of untitled records, “invisible” records, and records that require special toy-devices and instructional booklets to play and that, when played, sound terrible. Their performances, often costumed by collaborator Tabea Blumenschein, were variétés-style showcases of impulse and inexpertise: they recruited strangers unfamiliar with their work to interpret it on stage, played instruments they couldn’t play, misused and set fire to equipment, cross-dressed, and recorded and looped sounds while live, all with a DIY fluidity that transcended punk, which they found one-dimensional and normative.

Doris used androgyny against the gender roles ingrained in the scene and as a means of rejecting hierarchy at large, of castrating the patriarch and the totalitarian. In the face of division, of clearly divided and maintained borders, she proposed fusion; in resistance to the aesthetics of order, she preached humor and “dirtiness,” responding to fascism’s cleanliness with trash, puns, and Freudian slips.

Outputting Super-8 films, “natural catastrophe ballets,” performative garments – costumes that are artworks in themselves – intentionally poorly designed album covers, and countless drawings, Die Tödliche Doris reluctantly attracted the arts establishment. Doris was so good at being bad that she was bad at it: the work was and remains too good. Harald Szeemann curated them into “Der Hang zum Gesamtkunstwerk” (“The Tendancy Toward the Total Artwork”), a landmark exhibition at the Kunsthaus Zürich that explored a very German premise, and they were asked – and declined – to participate in “Documenta 7,” though they accepted the invitation to participate in the next one. But Doris confronted the ghosts of WWII and of Berlin not by assimilation into the pre-reunification artistic canon but by confronting death itself: her name is a play on the German for “the lethal dose,” and skeletons and fractured bodies abound in the group’s iconography. If Deadly Doris has a place in any pantheon, it is as a trickster divinity, a mischievous messenger with reentry to the underworld, a guide to the realms of chaos and death and to everything that constitutes an “in-between.”

Promiscuous and anti-fascist, critical but generous (and funny), creative amid contradiction and productive amid chaos, Die Tödliche Doris is the 032c Workshop blueprint we never had growing up. It is also the stimulus for our FW 20/21 collection. Designed by 032c Apparel creative director Maria Koch in collaboration with the group’s co-founder Wolfgang Müller, the garments feature imagery, lyrics, and leitmotifs from the Die Tödliche Doris archive, recombined and reproduced alongside new materials for a collection in the spirit of Berlin-Schöneberg, where the 032c headquarters now sit just around the corner from Die Tödliche Doris Haus.

There is nothing in man that was not in the first amoeba.

In 1980, Die Tödliche Doris released its first album: Der Siebenkoepfige Informator (The Seven-Headed Informator). The formless, “seven-headed informator” provides a mascot for their entire output: symbolic of Doris’ lack of congruous appearance, representation, or group membership, it is an amorphous, amoeba-like creature that continuously expands its body boundaries, constantly changing its shape and, in the process, permeating the boundaries between inner and outer form and experience.

The amoeba is an organism unique in its capacity for intuitive, intelligent (but non-rational), and radical adaptation. They are primordial creatures, yet they have perfected the survival strategies that humanity strives and hopes to attain to evolve in the face of an uncertain near future. They can be solo or social, reproducing alone, asexually, as well as with another, sexually, if the right conditions are met. Some assume animal and vegetal forms within one lifecycle, some practice bacterial husbandry. Amoebas are stewards of multiplicity, fitting not into a single taxonomic group but occurring, somehow, in every organism. They are crafty engineers, heroes of resilience and creation – and appropriate spirit animals for the subversive platform of Die Tödliche Doris. In the 032c Apparel collection, the group’s “seven-headed informator” appears superimposed onto Berlin’s Brandenburg Gate, like an anti-monument rejecting neoclassicism and hierarchy in favor of radical fluidity. 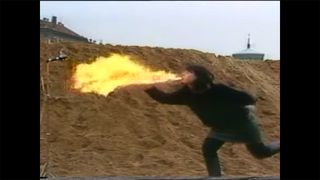 Die Tödliche Doris’ 1984 Naturkatastrophenkonzert (Natural Disaster Concert) performance chronicles and critiques a divided Berlin with equal parts absurdism and meta-punk iconoclasm. Against a barren landscape–– a by-product of the Wall–– the group performs a series of chaotic rituals. A woman appears over the crest of the dirt mound and spits fire at a microphone until it is ablaze. A man plays a jagged and unrehearsed series of notes on the violin before walking off camera. Another performer carries an accordion whose keys have been studded with tacks — pointy side up. As he winces and plays (or, attempts to play), the microphone in front of him continues to burn. Finally, all three members appear together to deliver a series of percussive gestures using what appear to be animal bones — a nod to the group’s skeletal figurehead, and to the histories piled in layers in the ground beneath them. When the microphone falls off its stand, flames licking its cranial shell, the performers continue on. Today, the group’s signature “Naturkatastrophenballets” take on a significance beyond the empty lots of an unbuilt 1980s Berlin, invoking imminent global climate disaster addressed in 032c Issue #37 cover dossier, “Black Hole Catalog.”

The lyrics to a 1981 Die Tödliche Doris song “Stop der Information” seem to speak to the current digital age, channeling both our hyper-attachment to mobile technology – through which we consume COVID statistics and crowd-sourced protest updates on social media apps – and our collective skepticism of the data-harvesting and unreliable news facilitated by these same platforms. Die Tödliche Doris’ words convey the contradiction and exhaustion many of us are feeling today, highlighting the unsustainability of our info consumption, and channeling the feeling that follows every new item or discovery: that it has happened before, and that the cycle must, somehow, stop.

The Sex Toy drawings that feature in the 032c Apparel collection are part of a series of works by artist, actor, and clothing designer Tabea Blumenschein (1952 – 2020). A core member of Die Tödliche Doris and a force of the Berlin scene, Blumenschein was known for her performative costume designs and the anarchist elegance of her uncategorizable personal style. In a sense, in dressing the collective for the stage, she brought Doris to life: “Doris has clothes to thank for her existence,” Müller has said, hinting at the figure’s phantom-like qualities. “Without clothing, Doris would have been impossible. Doris doesn’t have a body!”

In addition to her work with Die Tödliche Doris, Blumenschein acted in films by director Ulrike Ottinger, starring in the title role of Bildnis eine Trinkerin (Portrait of a Drinker), and collaborated with Berlin designers such as knitwear visionary Claudia Skoda. She passed away in March 2020, having left the limelight for a quiet bedsit in Marzahn many years prior. She nonetheless would emerge for occasional conversations with Doris: for the 2019 re-release of the group’s first album, Das typische Ding (The Typical Thing), which included one-minute recordings of 31 different vibrators, Blumenschein created playful drawings of each device, inspired by product reviews published by feminist queer theorist Katrin Kämpf.

At the Geniale Dilletanten festival in 1981, Die Tödliche Doris performed the song “Schuldstruktur,” barking the lyrics “Ich bin schuld, Du bist schuld” (meaning “I am to blame” and “you are to blame”) over a cacophonous violin and drum arrangement. The song’s title is likely a play on the term “Schulstruktur,” which refers to the educational system – an example of the group’s rejection of German post-war institutions and self-perception. 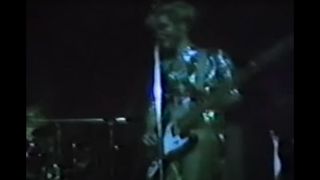 “‘Ingenious dilettantes,’ Müller explains, is a phrase ‘that bites itself’ – a contradiction in
terms. ‘The two ideas are confronting each other so something could happen, because everybody is an amateur.’ The mainstream German music scene of the time was dominated by the sclerotic professionalism of bloated rock groups imitating worshipfully the virtuosic chops of groups from Britain and America. ‘We hate this kind of professional, imitated music,’ Müller spits. ‘They wanted to become traditional rock stars!’ Die Tödliche Doris were anything but.”

Following Die Tödliche Doris, anti-brand, anti-monumental impulse, the 032c Apparel collection uses images of Berlin beyond its architectural attractions – namely, pictures of local wildlife inhabiting the city’s unmanicured parks. Foxes, ducks, and wild boar run free to the tune of “Furturistenpartei” (“Futurists Party”), performed at the Geniale Dilletanten festival in Berlin in 1981, in which the group imagines eliminating distinctions between built and green space, between human progress and nature: “The animals are stuffed / Open the national parks / In the name of the law / The destruction of archaeology / Why so revolutionary / Why so modern? / The world consists of molecules.”

Some of Die Tödliche Doris’ videos function as guides to Berlin, for example, “Städtefilm Berlin West,” a tour of the city’s divided center (and its central park), produced in 1983.

Words by 032c
Most Popular