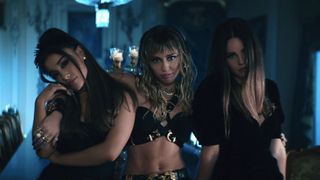 The official music video for Ariana Grande, Miley Cyrus, and Lana Del Rey’s “Don’t Call Me Angel (Charlie’s Angels)” has finally dropped and it serves as a fierce teaser for what’s to come in the new Charlie’s Angels reboot. Watch the Hannah Lux-directed visual above.

The three musicians spend the majority of the video sassing around a huge mansion, wearing angel wings, and throwing knives into the crotch of human-shaped targets. Ari is dressed all in-white and carries a walkie talkie, so we’re going to assume she’s the ring-leader here, while Cyrus is the muscle, dressed in black and performing from inside a boxing ring. Del Rey is seemingly the weapons expert and aforementioned crotch knifer.

“Don’t Call Me Angel” was also included in the first full Charlie’s Angels trailer, which dropped back in June. Revisit it below before the movie lands in theaters November 15.