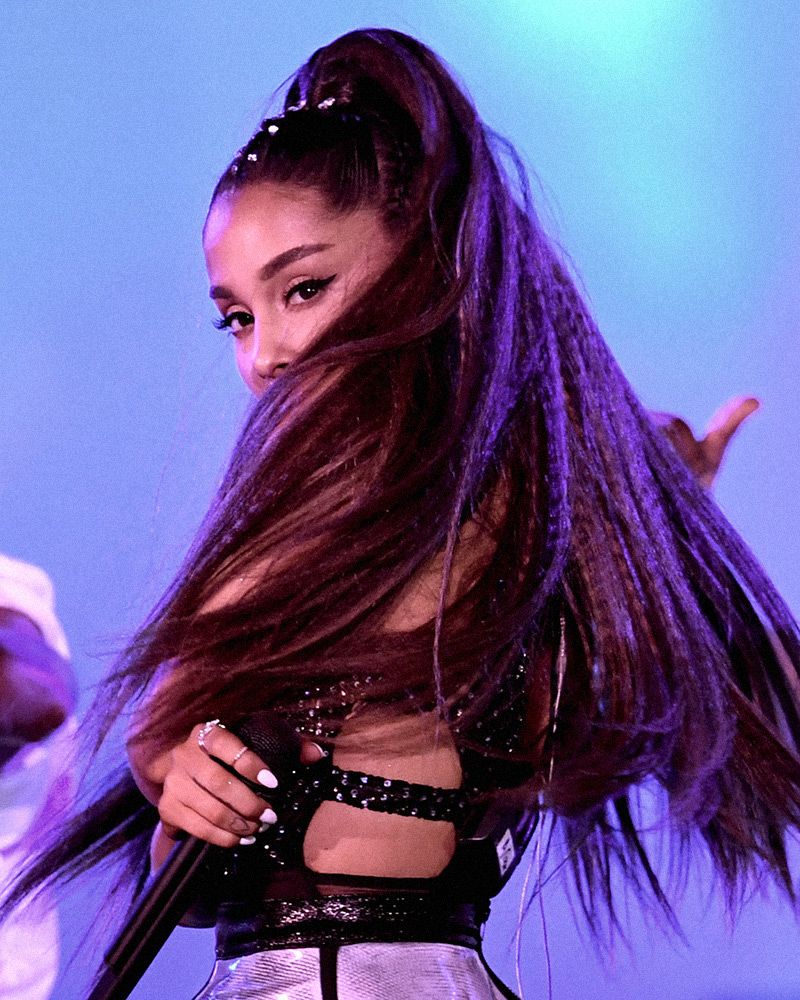 Ariana Grande is one of the world’s leading recording artists with six Grammy nominations and one win to her name, along with platinum certifications by the RIAA for each of her five full-length albums. An entertainer since childhood, she was first widely-known for her teenage acting roles on Nickelodeon, but since leaving television to pursue music full-time, Grande has evolved into one of today’s most powerful and followed singers, performers, and progressive activists. As one of the most influential figures on social media, she’s used her following to support feminist and LGBTQ issues, as well as a host of philanthropic causes ranging from ending online bullying and pet adoption to gun control and fighting cancer.

Born in Boca-Raton Florida to Joan Grande and Edward Butera.

Begins performing for live audiences, at first in local theatre productions of Annie, The Wizard of Oz, and Beauty and the Beast, and later on cruise ships and with local orchestras.

First arrives in Los Angeles looking to pursue a music career and record a full-length R&B album. She was rebuffed by her managers, who were skeptical over the viability of a 14-year-old releasing her own R&B album.

Cast in the supporting role of Charlotte in 13 the Musical on Broadway. She leaves high school in South Florida for the opportunity, and wins a National Youth Theatre Association Award for her performance.

Cast as Cat Valentine on the Nickelodeon sitcom Victorious.

Victorious premieres to the second-largest audience for a live-action Nickelodeon series. Once the first season of the show wraps shooting that year, Grande slowly begins recording her debut album in August.

Makes her first musical appearance on the track “Give It Up” from the Victorious soundtrack. While filming another Victorious season, in her spare time, Grande uploads videos of herself singing hit songs from the likes of Adele and Whitney Houston to YouTube. The popularity of her videos lands her her first recording contract from Republic Records. That December, her first single “Put Your Hearts Up” comes out, but Grande later disowns the track and the unreleased bubblegum-pop album it was meant for.

The Victorious finale airs, but her role as Cat Valentine is immediately reprised in a spin-off show called Sam & Cat. That August, she drops her debut album Yours Truly, which debuts at No. 1 on the Billboard 200. The lead single “The Way,” featuring Mac Miller, earns Grande her first Billboard top 10 hit.

The final episode of Sam & Cat airs, capping her career as a Nickelodeon star. Her second studio album My Everything debuts atop the Billboard 200. Three top 10 singles emerge from the album, joining Adele as the only woman with three top ten singles on the Billboard Hot 100 at the same time as a lead artist.

Begins recording for her third album, Dangerous Woman. Releases the song “Focus” as the album’s lead single, which earns her another top 10 hit.

Releases Dangerous Woman and the lead single of the same name, which debuts in the top 10, again. For her successes, Time names her as one of the 100 most influential people in the world for the first time. She also begins dating rapper Mac Miller.

After a May concert in Manchester, England, a suicide bomber detonates outside the arena, killing 23 and injuring more than 500. Grande returns to Manchester the following month for a televised benefit concert, which raises over $23 million for victims of the bombing and any affected families. That December, Billboard names her “Female Artist of the Year.”

Releases her fourth studio album Sweetener, which debuts at no. 1. The project’s lead single “No Tears Left to Cry” is another top 10 hit, making her the only artist to have top 10 hits as lead singles from each of her first four albums. Later that year, she releases “thank u, next,” which addresses her past relationships, including those with Mac Miller, Big Sean, and her ex-fiance Pete Davidson, whose jokes about their broken engagement are believed to have prompted the track. It becomes Grande’s first no. 1 single in the US and its music video broke record for the most-watched music video within the first 24 hours of its release on YouTube.

Grande headlines Coachella for the first time and releases her fifth studio album thank u, next to a chart-topping debut. Thanks to an array of hit singles from the album, she becomes the first solo artist to occupy the top three spots on the Billboard Hot 100, and the first artist to do so since The Beatles in 1964. Time once again names her as one of the 100 most influential people in the world, and at the 2019 Grammy Awards, she wins her first Grammy for Sweetener. In February 2019, she becomes the most followed woman on Instagram.

Ariana Grande Has a Message for Those Refusing to Self-Isolate
LifesponsoredMarch 16, 2020