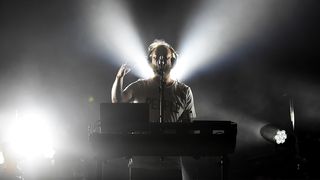 As fans were leaving Bon Iver’s set at All Points East Festival on Sunday night the band played two unreleased songs over the PA system.

Amazing. @boniver just finished their set @allpointseastuk and are currently playing a couple of brand new tracks over the PA as people leave. pic.twitter.com/rganbYgPtS

While “Hey, Ma” and “U (Man Like)” were playing to unsuspecting festival-goers Bon Iver directed the audience to icommai.com. A quick visit to the cryptic website reveals that Moses Sumney, and Jenn Wasner of Wye Oak feature on “U (Man Like).” The band had already played “Hey Ma” at last year’s Bonnaroo.

Scroll down to watch official lyric videos for both of the tracks, which are set to appear on the forthcoming album.

Kanye West & Bon Iver Reunite on Francis and the Lights Track “Take Me to the Light”
MusicsponsoredSeptember 3, 2019