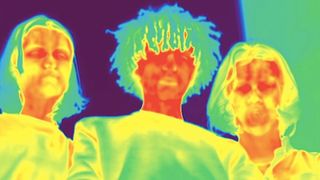 BROCKHAMPTON has just dropped the music video for their latest single “J’OUVERT,” featured off their Iridescence album due out Friday, September 21.

Directed by Spencer Ford, the visual was captured during the band’s time in London, where they recorded Iridescence. The video’s aesthetic portrays a thermal image processing effect, which is also evident on the album’s cover artwork, as well as their recently released merchandise.

Check out the Iridescence album artwork and tracklist below, as the crew will be embarking on their North American Fall tour beginning September 21.

In other new music, French Montana and Drake celebrate rule-breakers on “No Stylist.”